JAMES D. SHERWOOD was a pioneer worker from Galveston, Texas. He and his wife, Effie J. Sherwood, had class instruction there from Ruth Ewing of Chicago. The couple entered the public practice of Christian Science and were first listed in The Christian Science Journal in September 1893. Three years later, the Sherwoods and William H. Love organized First Church of Christ, Scientist, Galveston, and in 1899 the couple entered the Normal class. In the middle of that year, Mrs. Eddy requested that they come to New Hampshire, and while there Mr. Sherwood held the position of First Reader in the Christian Science church in Manchester for a year and a half. Later, after they had moved back to Texas, they both served as Readers in a branch church in Houston, and both were active teachers of Christian Science. They first taught their classes together in Houston until the Manual of The Mother Church required that either husband or wife, but not both, could teach annually one class. Mr. Sherwood then conducted the classes until 1919. 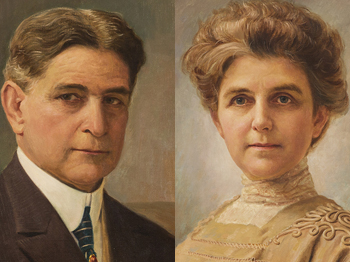