When she was a little girl, she lived on her family’s farm in Bow, New Hampshire. There, she helped take care of the farm animals with her older brothers and sisters. The Bakers had sheep, pigs, chickens, oxen, horses—and a Newfoundland dog named Hunt!

Mary loved to look after the farm animals. If any were frail or weak, she would take them in her arms and nurse them back to health. Many years later she told a friend, “I would take the little chicks into the bosom of my dress and hold them until I heard a fluttering sound and found the chicken active and strong and eager to run away….”1

Mary’s chores included shelling corn for the chickens to eat. One evening, a kernel slipped and landed on the floor. As she pushed the kernel toward the fireplace with her foot, her mother chided, “Mary, get down and pick up that corn.” “Oh, Mother,” Mary protested, “it is only one grain.” Her wise mother insisted, pointing out, “it will help to make a meal for a little chick.”2 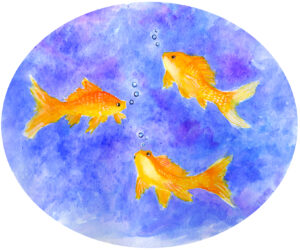 Later in life, when Mary Baker Eddy owned a home of her own, she stocked an outdoor fountain with goldfish.3 She loved the fish in her fountain and liked to feed them herself.4 A teenage girl who lived next door remembered how Mrs. Eddy called to the fish by saying, “Come to Mother”—and to the girl’s surprise, the fish came instantly and took the food right out of Mrs. Eddy’s hand.5

Mary Baker Eddy also loved horses all her life. As a child on her family’s farm, she liked to ride them. As a grown-up, she owned horses of her own. Some of them were workhorses, helping to mow the lawn and plow the fields. Others helped pull her carriages. Before there were automobiles, people traveled in horse-drawn vehicles like carriages, and Mrs. Eddy liked to go for a ride every day.

She was very fond of her horses, and each one had a name.6 Over the years there were Jerry and Jean, Nellie, Major, Duke and Duchess, Dolly, Prince and Princess. She treated them all with kindness and love, and even had a sign put up in the stable that read: “Always speak to the horses before entering the stalls.”7

Mrs. Eddy spoke to them, too! Often when she returned from her carriage rides, she would pause to pat her horses and talk to them. Sometimes, they even competed for her attention. “Jerry was nearer to the verandah than Jean,” her friend Clara Shannon remembered, “and she … would pat his neck or face and speak to him, and then Jean would put his head up over Jerry’s neck, as if he were afraid of being left out, and then she would speak to him.”8

One day when Mrs. Eddy was riding in her carriage, her horses were frightened by something on the road. The driver lost control as they dashed off down the street. Mrs. Eddy put her head out of the carriage window and spoke quietly to her horses. The horses calmed down, and Mrs. Eddy arrived home safe and sound.9

Someone from the Philippines once sent Mary Baker Eddy a letter asking if it was all right to pray for animals. The answer was a resounding yes! “You have permission to heal the animals as well as mankind,” Mrs. Eddy wrote back. “When I [was] in practice, I healed them and found them responsive to Truth in every instance.”10

For example, at one point, Mrs. Eddy owned two canaries named Benny and May. One day, she noticed that May had a broken foot. Mrs. Eddy prayed for her little bird, and within three days, May was perfectly well, hopping about and singing joyously as usual.11

“Mrs. Eddy’s love included animals and birds as well as human beings,” one of her secretaries remembered. “And birds and animals felt the love she radiated and responded to it.”12

3. This was while living at Pleasant View in Concord, New Hampshire. John Salchow, “The Privilege of Serving Our Leader,” We Knew Mary Baker Eddy Expanded Edition, Vol. 1 (Boston: The Christian Science Publishing Society), 377.

6. Clara Shannon noticed that Mrs. Eddy took to horses, and that they took to her. She wrote about one of Mrs. Eddy’s interactions with a particular horse: “…he [the horse] seemed to feel her kind thought, and bowed his head up and down, showing every sign of pleasure—they were friends at once.” Shannon, “Golden Memories,” 32, LMC.