This article is the third in a four-part series about the quartet of women pictured below—Mary Eastaman, Ellen Clark, Janet Colman, and Julia Bartlett. The group was photographed at the home of Mary Beecher Longyear in December 1917, as Mrs. Longyear began her work to preserve the history of the early years of Christian Science and the life of Mary Baker Eddy. Click here to read the first article in the series, and here for the second.

In the early days of the Christian Science movement, when Mary Baker Eddy was teaching in Lynn, Massachusetts, some students rebelled and rejected her as teacher and leader. Others, however, loved her, revered her teaching, and loyally supported her leadership. One of those loyal students was Ellen Latham Clark.

In 1880, Mrs. Clark came to Boston from her home in New London, Conn., in dire straits—suffering, in her words, “a period of much trouble and distress.”1 She was told that hearing Mrs. Eddy preach on Christian Science in Hawthorne Hall on Park Street would do her some good. Mrs. Clark was dubious, but desperate. As she recalls in her personal journal: “I went rather reluctantly, but with a longing that I might possibly receive something hitherto unknown—a higher sense of the relationship between God and man.”2

Her first encounter with Mrs. Eddy made a profound impression, as she recalled: “Shall I forget that day?—or her face as she turned to the audience? Her eyes rested on me in so wonderful a way, that tears welled up in my own.”3 Mrs. Eddy began by reading from John 14, taking as the text for her sermon, Jesus’s statement to Thomas: “I am the way, the truth, and the life.” Mrs. Clark later wrote: “Had she known all the weary way I had come to find this blessed Truth, she could not have spoken with more directness.”4

Mrs. Clark’s regular attendance at sermons and meetings caught the attention of Mrs. Eddy and her husband. A month later, Gilbert Eddy showed up at Mrs. Clark’s new home in Dorchester, Mass., bringing a copy of Science and Health for her to study, and assuring her that, in his view, she understood Christian Science better than some of his wife’s students.

Traveling to Canada that spring, Mrs. Clark shared what she understood of Christian Science with folks she met along the way. “So the seed was sown from Ogdensburg to Ottawa, Montreal, and far-away Quebec,” she noted.5

Back in Boston that summer, she sprained an ankle and suddenly needed to put into practice what she had been learning. Her journal tells us: “Had to demonstrate myself, as there was only God to hear—and God did hear, for it was instantaneous.”6 Inspired by that healing, she immediately sought to learn more. September found Mrs. Clark in Mrs. Eddy’s parlor in Lynn for her course of 12 lessons in Christian Science healing.

As that class concluded, a group of students, responding to attacks against their teacher in the press, wrote a joint letter declaring Mrs. Eddy “to be the best teacher and demonstrator of Christian Healing known today on the face of the earth….”7 Mrs. Clark was one of those who signed their names. A year later, several of those students did an about-face, signing a letter that harshly withdrew their endorsement of their teacher and leader. But not Mrs. Clark. Standing firm with other truly loyal students, she maintained her first impression of Mrs. Eddy, recorded earlier in her journal: the tears welling up in her eyes “as if I knew God’s messenger stood before me.”

Mrs. Eddy surmounted the revolt, moved on to Boston, and started anew. Mrs. Clark was among those who supported her in that advance. Some years later, Mrs. Eddy showed her appreciation in responding to a note from Mrs. Clark: “Your letter is refreshing. It shows a growth that does encourage my heart . . . and I thanked God with joy unspeakable for one such student….”8

In 1892, when Mrs. Eddy reorganized her church as The First Church of Christ, Scientist, she named the ever-loyal Ellen Clark as one of the 12 “First Members” chosen to help restructure the church and construct its edifice in Boston.

Two years later, Mrs. Eddy propelled construction forward by offering selected students the opportunity to contribute $1,000 each to the building fund and have their names placed in the cornerstone. The contributions totaled $42,000—a substantial sum in those days.9 Mrs. Eddy’s grateful response said that her quiet call for extra contributions found those chosen students “‘with one accord in one place.’ Each donation came promptly; sometimes at much self-sacrifice, but always accompanied with a touching letter breathing the donor’s privileged joy.” 10

Ellen Clark’s contribution was among them, and her name is preserved in the cornerstone of The Mother Church.

The small class that Mrs. Clark had attended in Lynn in 1880 included Julia Bartlett. A bond formed between the young women, two of the earliest students to remain faithful to their teacher as Leader of the Christian Science movement. The bond was still strong as they stood together nearly 40 years later for a group photo in Mrs. Longyear’s home. Mrs. Clark continued her work as a Christian Science practitioner until 1922.11 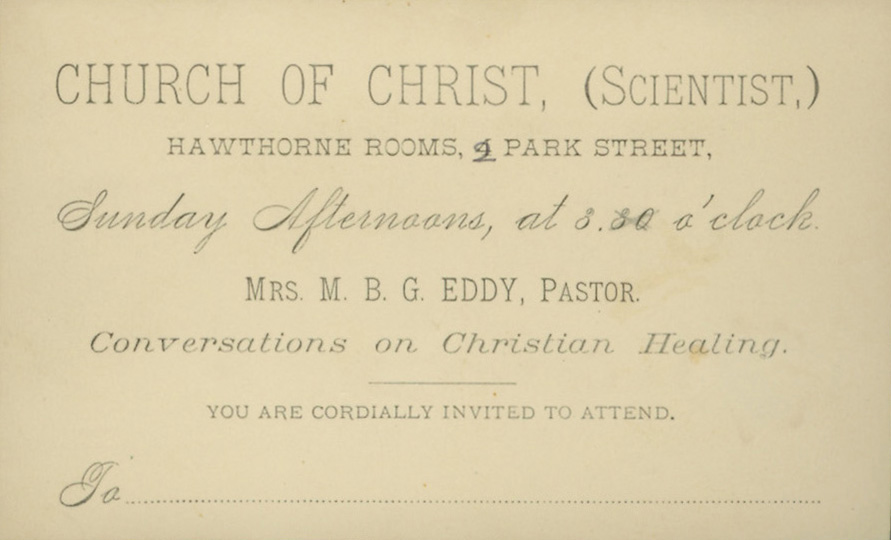 A calling card invitation to the Sunday gatherings at Hawthorne Hall. Private collection. 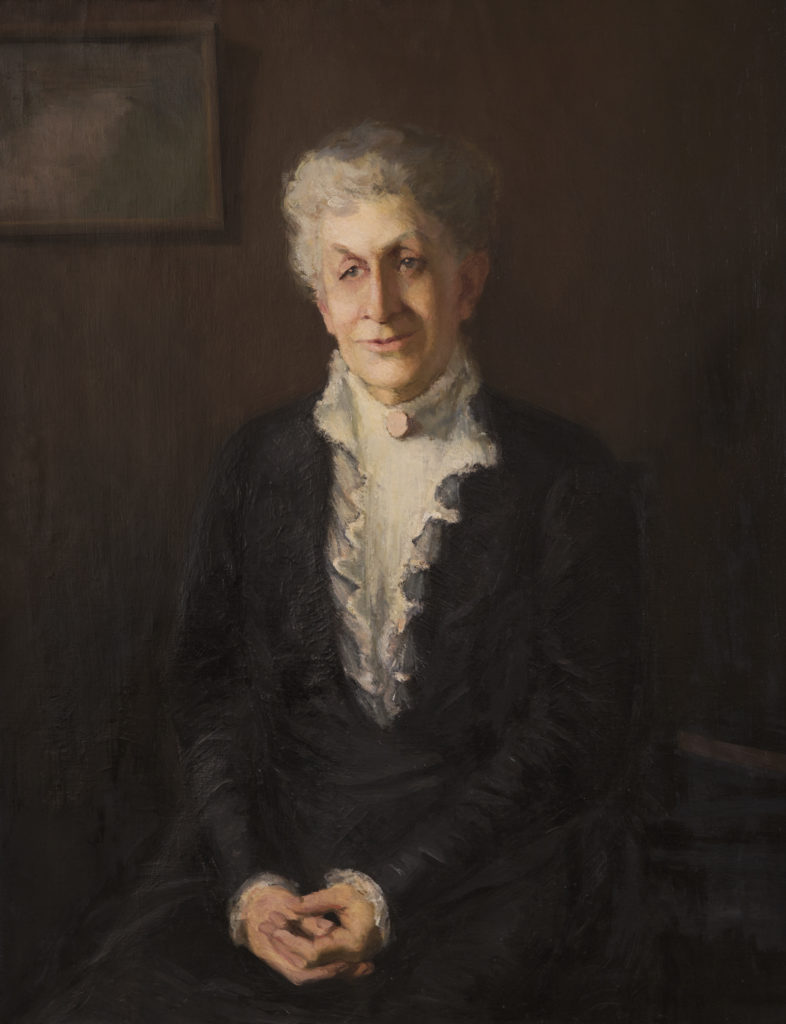 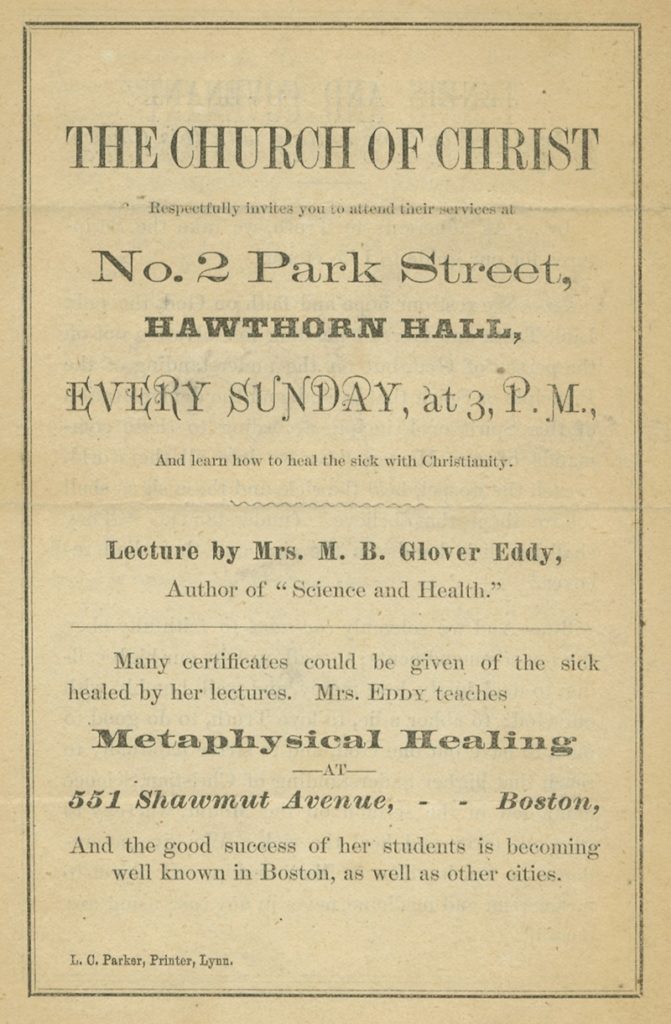 An announcement of Christian Science services and lectures by Mrs. Eddy. Private collection. 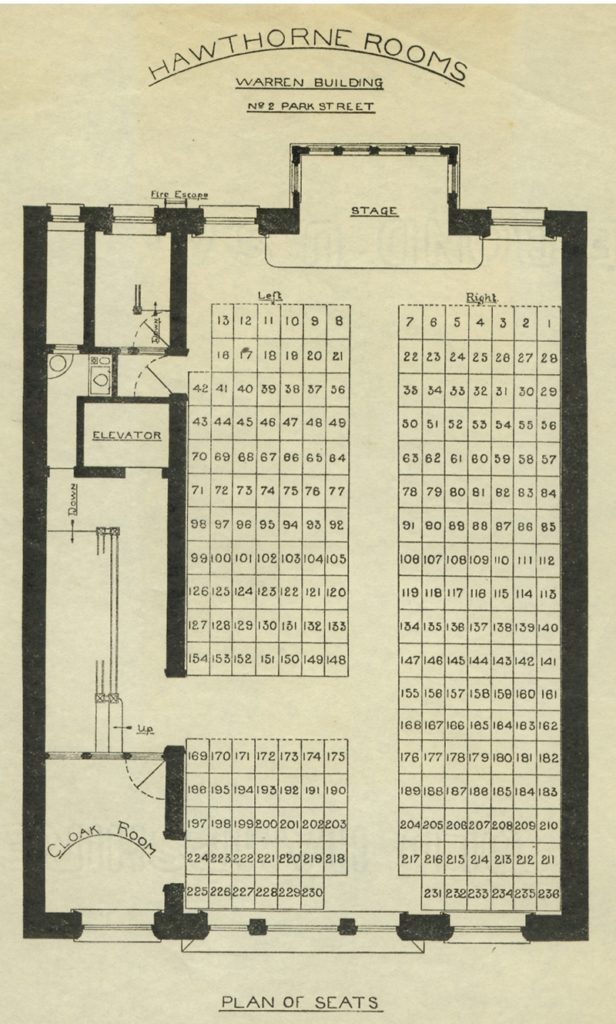