JAMES E. BRIERLY was of English parentage. He lived in Millbury, Massachusetts, moving later to Connecticut. His wife, Ruth, was persuaded to try Christian Science in 1884 to treat a painful chronic condition. After a swift healing, the couple entered Mrs. Eddy’s Primary class in September 1885, and James opened a practitioner’s office in Worcester, Massachusetts. By the following spring, the Brierlys began holding Christian Science Sunday meetings in their parlor, continuing until they moved to New Bedford, Massachusetts, in January 1887. After Normal class instruction with Mrs. Eddy that October, Mr. Brierly began teaching. In the 1890s he published some articles in the local press that helped foster a friendly attitude toward Christian Science, and he was a charter member of First Church of Christ, Scientist, New Bedford. 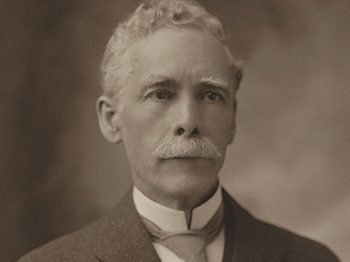