MARY E. EATON grew up in Chelsea, Massachusetts, and worked in the library there. When relatives introduced her to Christian Science, she at once accepted it, and after taking Primary class instruction with Flavia Knapp, one of Mrs. Eddy’s students, she went into the public practice of Christian Science. Miss Eaton was very devoted to Mrs. Eddy, and served for a short time at Pleasant View, her home in Concord, New Hampshire. Mrs. Eddy gave Mary a beautiful pin — a dove set in pearls, which is shown in this portrait — as a token of her appreciation. Years later, Miss Eaton was on call for several years when Mrs. Eddy lived in Boston, and attended to her personal shopping. She was a member of Mrs. Eddy’s last class in November 1898, and in 1907 she had Normal class under the Christian Science Board of Education. She began teaching in Boston, but in 1918 went to Toronto for several years. By 1923, Mary Eaton returned to Boston, later moving to Seattle, where she taught for a number of years. 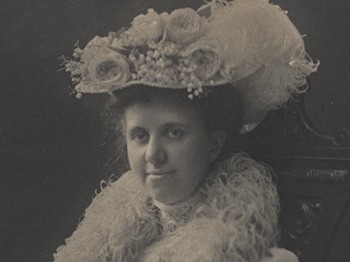