TWO READERS, A MAN AND A WOMAN, were required for the effective functioning of the new Pastor of The Mother Church — the Bible and Science and Health with Key to the Scriptures. Judge Septimus J. Hanna was appointed a Reader immediately upon the announcement of the new Pastor by Mrs. Eddy. In the second week of January 1895, Mrs. Eldora O. Gragg was appointed a Second Reader and asked to begin her work at once, which she did on January 20. Thus came into being the Christian Science service much as we have it today. Until December 1898, the First Reader conducted all services and read from the Scriptures, while the Second Reader read from Science and Health. The Readers’ assignments were then reversed and since 1898, the Second Reader has read from the Bible and the First Reader from the textbook.

Mrs. Eldora O. Gragg, the first Second Reader in The Mother Church, was healed in 1884 of a disease pronounced incurable, and thereafter she became a lifelong student of Christian Science. Taught first by a loyal student of Mrs. Eddy, Mrs. Emily M. Meader, she later studied with Mrs. Eddy and had Normal Class with her, thus becoming a teacher. Over the years Mrs. Gragg taught almost a thousand students.

She was one of forty Christian Scientists to contribute $1000 each to the Building Fund of the original edifice of The Mother Church as a Christmas gift to Mrs. Eddy on December 25, 1893. Mrs. Gragg and the Association of her students presented the chimes for the tower.

In 1892 Mrs. Eddy appointed Mrs. Gragg one of the twelve students entrusted with the organization of The First Church of Christ, Scientist, in Boston, Massachusetts, known as The Mother Church, and she became one of its First Members, actively participating in its government until 1901, when the responsibilities of government passed entirely to the Board of Directors.

According to the official biographical sketch of her in the Longyear Foundation Collection, Mrs. Gragg served for more than seven years as Second Reader without missing a single service during this time. Thus as practitioner, teacher, Reader, and First Member she was truly an early builder of the Christian Science Church.

This article was originally published in the Winter 1964 Longyear Quarterly News. 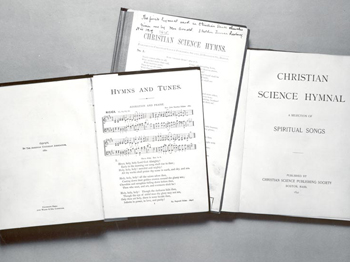 First Members of The Mother Church

Landmark Reorganization of the Church (1892)