It was the smile she noticed first.

“She had such a sweet smile,” recalls Emma Blaney. “I knew nothing of Christian Science, nor who Mrs. Eddy was but her smile seemed to stay with me.”1

Half of “The Martelles,” a traveling vaudeville act billed as the “premier Bicyclists of America,” young Emma and her husband Harry were booked to play the Concord State Fair in the summer of 1901.2 It was there that Emma saw Mary Baker Eddy as she was driven around the track in her carriage, and heard about her donation of shoes to needy children. “I was very much impressed with her,” Emma later noted.3

The Martelles were by all accounts a big hit at the fair. The Concord Evening Monitor called their act “one of the most attractive features on the programme” and praised Emma’s performance (“the woman was just as good as the man”).4

Later, back at the Eagle Hotel, Emma recalled that “beautiful, peaceful smile,” and asked the clerk about Mrs. Eddy. He explained that she was “the founder of Christian Science,” a woman “loved by all the people of Concord.”5

Several stops later on the vaudeville circuit, the Blaneys arrived in Cleveland. Emma noticed a book with Mrs. Eddy’s name on it at the home of their hosts, who as it turned out were Christian Scientists. The Blaneys continued to encounter Christian Scientists on their travels, but it wasn’t until they lost all their belongings in the San Francisco earthquake a few years later that Emma took up the study of Christian Science.

Healings quickly followed, including harmonious childbirth after a doctor’s dire prediction.6 All four of the Blaney children were raised in the Christian Science Sunday School, and Emma would eventually publish two testimonies in the Christian Science Sentinel detailing her family’s numerous healings, including the remarkable recovery of her eight-year-old son, Floyd, after he was run over by a car. The boy was carried home, to all appearance lifeless.

“Every member of the family was holding to the truth,” Emma recorded. A Christian Science practitioner was called, and through earnest prayer the boy revived and was “perfectly normal” by the time the concerned driver returned that night to check on him.7

This proof of God’s protecting care clearly made a deep impression on Emma, who would be listed as a practitioner in The Christian Science Journal just a few years later. She remained in the practice for over thirty years.8

“Oh how wonderful it is to all to have the Bible opened for spiritual understanding and healing messages,” she would write. Noting a direct link between this quickened understanding and Mary Baker Eddy’s willingness “to follow Jesus’ path step by step,” and share her discovery with the world, Emma added, “To think, that I was led to this glorious truth through her smile.”9

This article is a sidebar to Visit to the Concord State Fair. 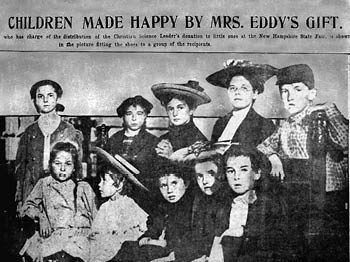 Shoes for Little Feet: The “soft touches of humanity”