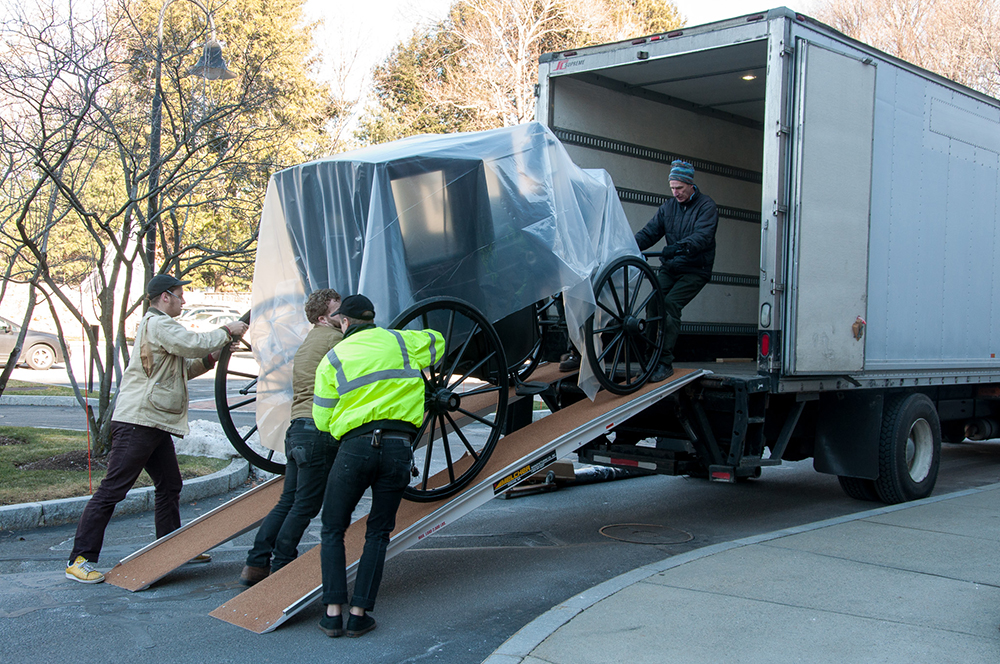 Bright and early this past Tuesday, the Longyear staff assembled in the lobby of the Museum and headed outside into the brisk February air. An eagerly anticipated day had finally arrived, and something special was about to happen.

The First Church of Christ, Scientist, in Boston has given Longyear an exceedingly lovely gift: two carriages and a boat that belonged to Mary Baker Eddy. On this sunny winter morning, the brougham carriage was delivered to the Museum. 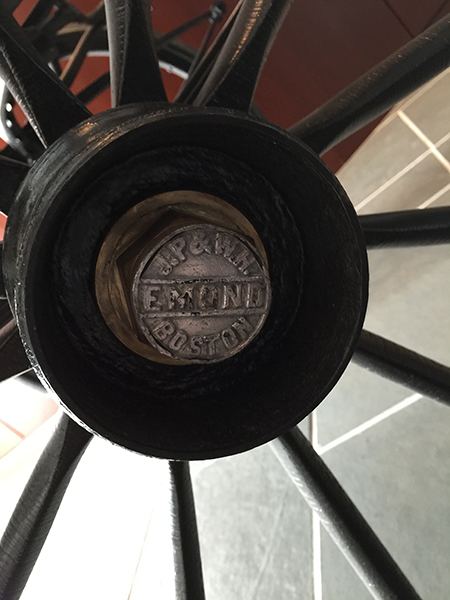 Built for Mrs. Eddy in 1895 by J. P. and W. H. Emond Carriage Builders of Boston, the brougham was first used at Pleasant View, her home in Concord, New Hampshire. It would serve Mrs. Eddy well for the next 15 years, both there and at 400 Beacon Street in Chestnut Hill, Massachusetts. 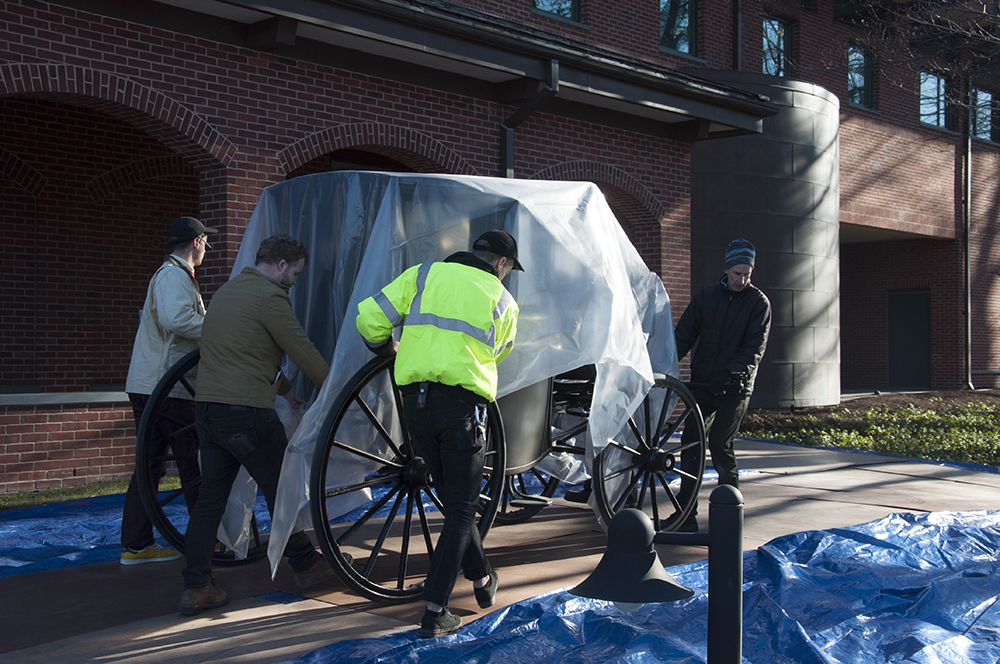 Mrs. Eddy’s carriage is moved along a special ramp toward the Museum.

The closed two-door carriage, named for Lord Henry Brougham, a British statesman who originated the design in the early 19th century, is roughly equivalent to a limousine or town car of today. It cost $975 at the time it was purchased — although the pair of carriage horses required to pull it would have doubled the price. 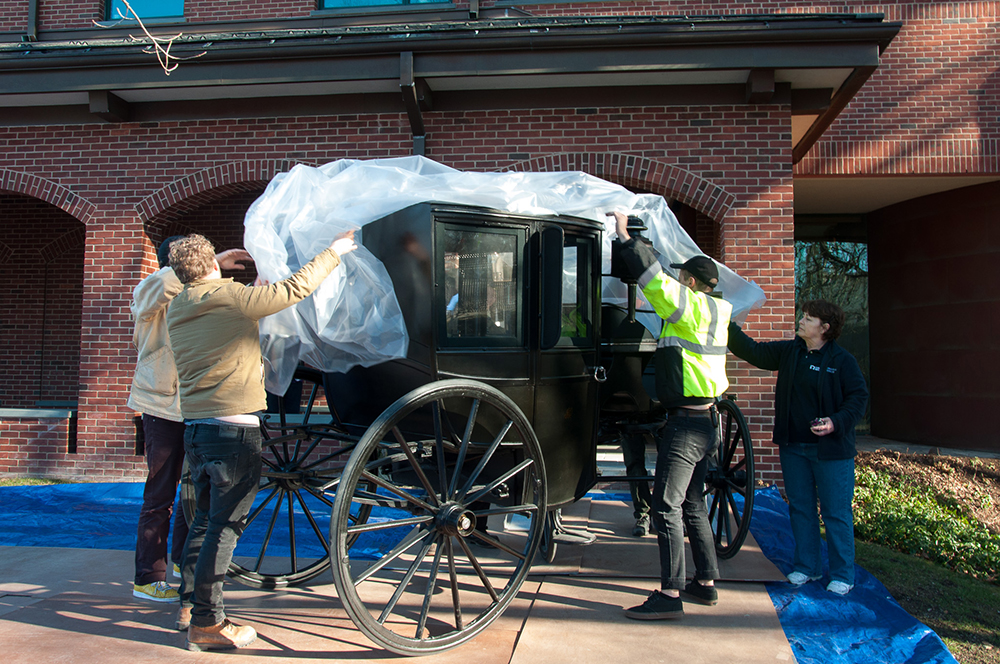 Time for the unveiling!

Mrs. Eddy’s custom specifications for the brougham included windows in the rear panels, green cloth for the seat, and quilted satin for the head lining. 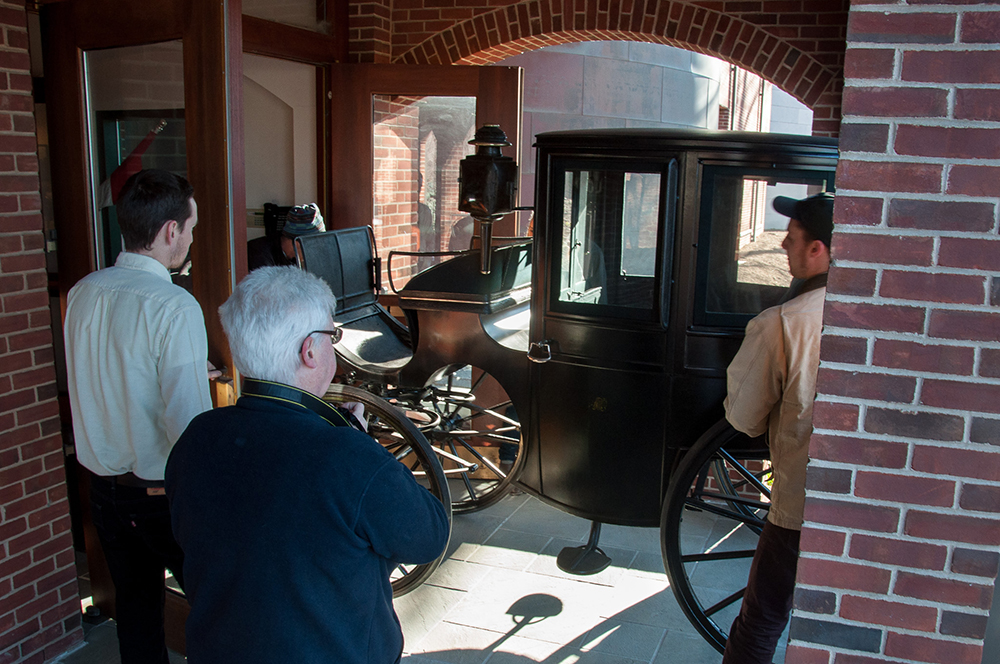 In 2007, The Mary Baker Eddy Library in Boston had the carriage prepared for public display by expert conservators B. R. Howard & Associates, Inc. The process included stabilizing and cleaning the paint, and replacing the original solid rubber tires, which had flattened over the years. 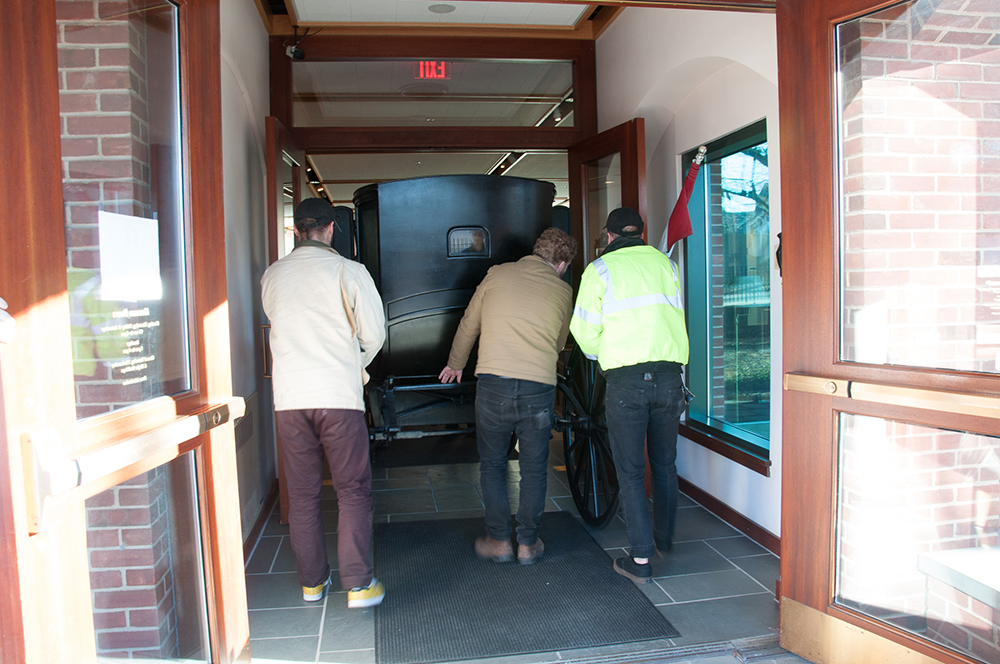 Which it did, with just inches to spare!

Along with the brougham, The First Church of Christ, Scientist, in Boston also gave Longyear Mrs. Eddy’s Victoria carriage, which will be on view in the Carriage House at 400 Beacon Street, her home in Chestnut Hill. The gift includes the skiff that once plied the pond at Pleasant View as well. For the time being, the boat will remain in storage while the staff determines where this large artifact can best be displayed. 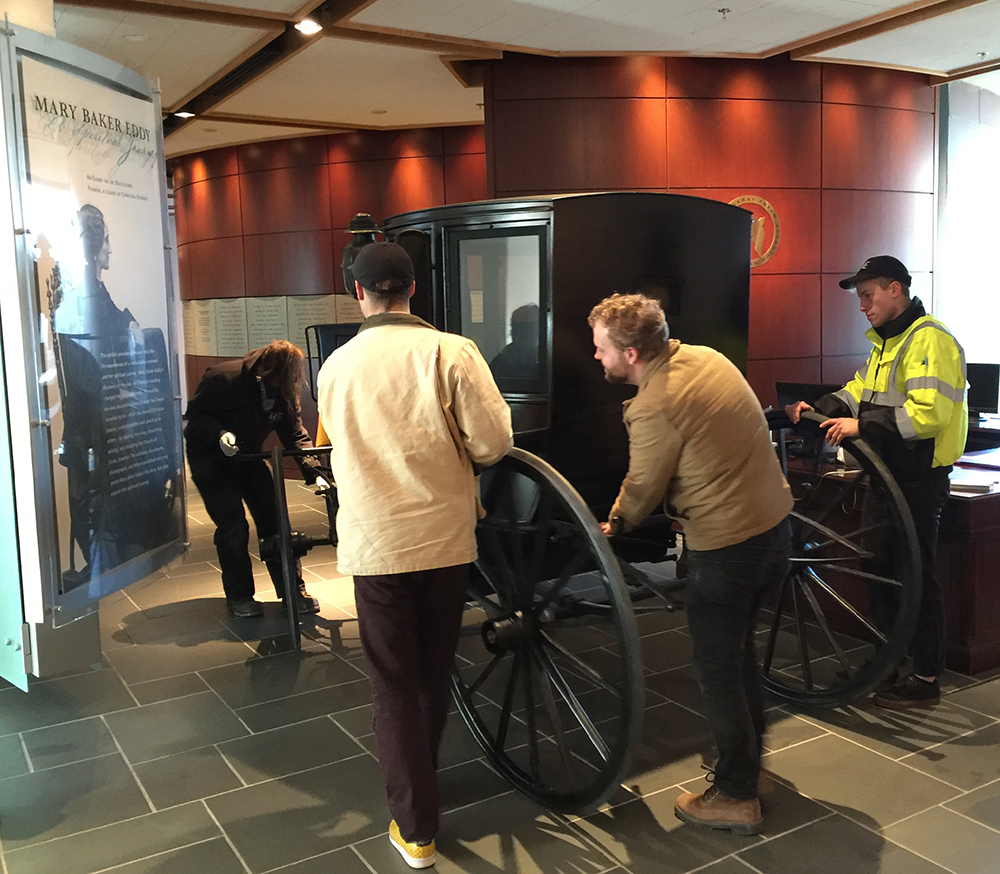 The carriage is gently wheeled through the lobby…

Mrs. Eddy’s daily carriage rides offered a brief respite from the demands of work, as well as solitude for refreshment and prayer. She once commented, “I have uttered some of my best prayers in a carriage.”1 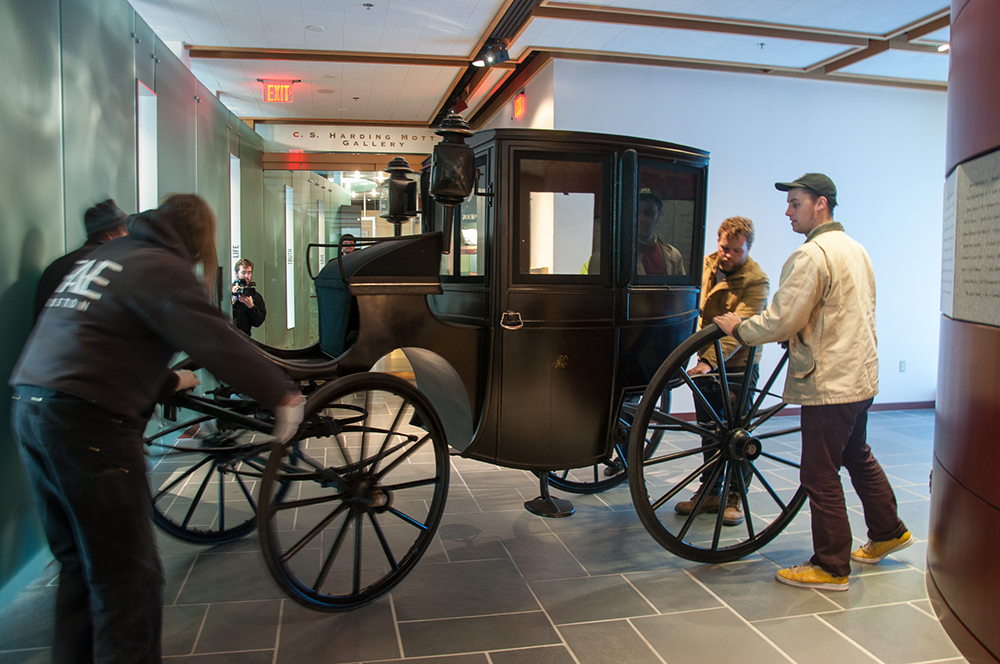 And maneuvered into position in its new home.

The trustees and staff of Longyear Museum extend their heartfelt thanks to The First Church of Christ, Scientist, in Boston for these generous gifts. 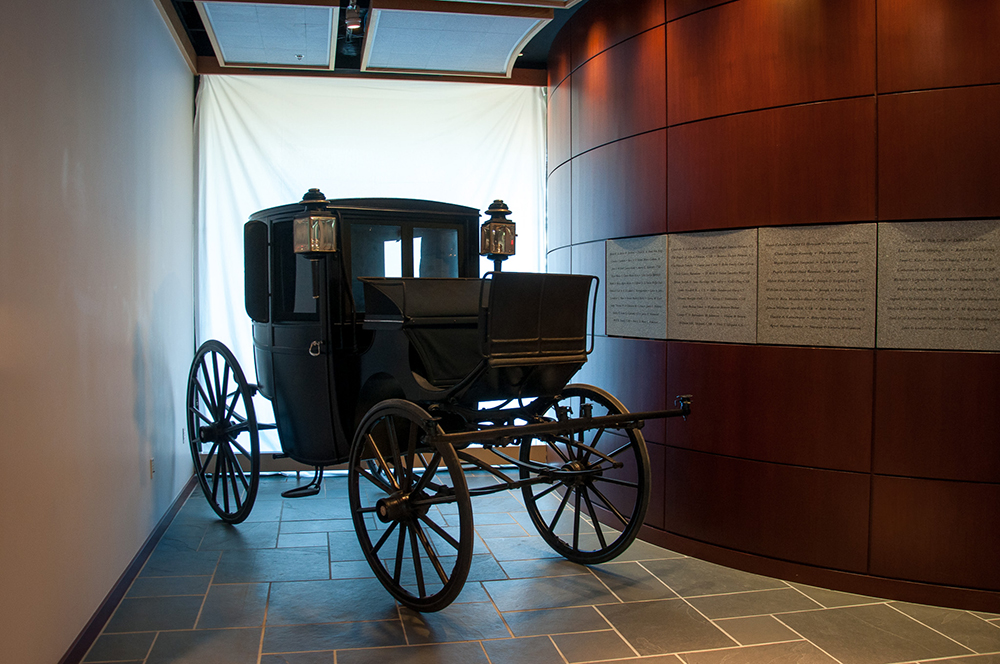 The niche between the Cobb Theater and the Mott Gallery looks tailor made for Mrs. Eddy’s carriage.

Longyear’s collection services team will be adding interpretation and signage for the brougham soon. Stay tuned for more information — but meanwhile, feel free to stop by the Museum and take a look!