A long time ago, in 1891, twelve Sunday School students in Boston, Massachusetts, were asked a question: “How many would like to become little workers for this Home?”

The Home in question was actually a church—The First Church of Christ, Scientist, also known as The Mother Church—which Christian Scientists were planning on building. What do you think their answer was?

Every hand shot up!1

One girl suggested a way they could help. “I want to give some money out of my own bank!”2

That day, each student received a dime (equivalent to three dollars today) and was told to make use of this “talent.” Do you know what a talent is? A talent is a measure of valuable currency, like dollars or pesos or euros. Christ Jesus’ parable in the Bible (see Matthew 25: 14–30) tells of workers who were blessed when they multiplied their talents. And that’s what these Sunday School students were being asked to do – use their dime so they could give more to The Mother Church.

And with this, the work of the Busy Bees—as this active, generous, inventive group of children were called—began. As word spread throughout the Christian Science movement about the work of the Boston Busy Bees, more and more children wanted to join in the fundraising efforts.3

“Do you know what my little girl has bought with her ten cents?” one mother asked proudly. “A bottle of glue. She and her twin brother went into partnership. He bought paper, tinsel, doll heads, etc., and they are going to dress paper dolls, and sell them.”

Selling their product at fifteen cents apiece, including a wardrobe of three dresses for each doll, the twins made a total of $20—that’s $600 today! Christian Scientists throughout the United States, England, Ireland, and Germany bought the dolls!4

One boy invested his ten cents in popcorn, paper bags, butter, and salt, and started a popcorn business. Another sold magazines door to door. Other children earned money by selling flowers, shoveling snow, painting fences, and running errands. One little girl made aprons, another earned money for styling her grandmother’s hair, while yet another multiplied her “talent” by feeding a neighbor’s horse.

“My dear little friends,” Mary Baker Eddy wrote the Busy Bees, “Do you know how much I love you? Do you know that God loves you?”

She continued: “Only think of having these gems of childhood character among the foundation stones for the Church of Christ, Scientist, in Boston! Only think that sometime I may go into this Church—look at its massive walls, and try to think how many doll dresses, how many paper bags of popcorn, how much candy it took, how much shoveling of snow, carrying up wood, yea, how many loving, tireless tasks the dear children cheerfully performed to help build the first Church for Christian Science in Massachusetts.”6

When the Busy Bees met three months later, there were now 52 in the group! When each one shared how they had made use of their “talent” and multiplied their dimes, together they had all earned $135.64, which equals more than $4,000 today!

Isn’t that amazing? What do you think was their secret to success?

Maurine Campbell, the Sunday School teacher in charge of the Busy Bees put it perfectly when she said: “Each had simply utilized his opportunity.”7

Maurine Campbell loved children. She had been a schoolteacher and principal, and now was a Christian Science practitioner and a Sunday School teacher. When the idea to have children help raise money for The Mother Church came to her, many Sunday School students wanted to help.

The children planned to use their money for a special room in the church for Mrs. Eddy, and to call it “Mother’s Room.” (Mother was a loving way that many Christian Scientists described Mrs. Eddy.8)

In a letter, Maurine mentioned the deeper meaning behind this special room. “Much love to the dear children,” she wrote a friend, “and may each always have a Room in the heart for Mother.”9

After three months, the Busy Bees were ready to roll up their sleeves again.10 But first, Maurine had a surprise for each Bee: A beehive bank and a little gift made out of a walnut!

The resourceful and entrepreneurial Busy Bees quickly started buzzing again. (An entrepreneur is someone who creates, invents, and runs his or her own business.)

May Beck and her siblings from Nebraska earned one dollar for helping their father in the harvest field. “I earned my part riding the lead horses on the binder,” May reported proudly.11

Eight-year-old Zilfa saved the coins her parents gave her for candies and treats and sent 50 cents to the church fund.12

Some children, like five-year-old Myrtle, had a change of heart. Myrtle had been saving her pennies for her birthday party. When her father suggested she send her money to Boston, Myrtle was horrified. “No! I am going to have a birthday party!” But two weeks later, she changed her mind. “Papa, I am going to send my money in a letter to Boston, to build the Christian Science Church.” When her father told her she wouldn’t be able to donate her money and have a birthday party, she replied: “I don’t care. I will have a Church.”13

Even a 14-month-old Christian Science toddler pitched in, earning her contribution by giving out kisses!14

Stella Lutz from Nebraska earned her money picking strawberries. She also raised a lamb and sold it for five dollars. “I have a mamma, papa, and two sisters,” Stella wrote Mrs. Eddy. “We are all Christian Scientists. I go to Sunday school every Sunday. I read the Bible and Science and Health. I love to learn. I am eight years old, — so good-by. My name is Stella Lutz.”15

“Give my love and thanks to your dear daughter,” Mrs. Eddy wrote Stella’s mother, “and tell her that our heavenly Father is not unmindful of her cheerful sacrifice, and she will be all the happier for every good and unselfish thought and act.”16

The Christian Science Sunday School in Wilmington, Delaware, sent a $5.00 check to the Church, which equals $150 in today’s dollars. To raise the money, five girls and two boys (all under the age of eight) were given Christian Science pamphlets and encouraged to sell them for a penny each. One little boy, not quite four years old, sold over one hundred of them! Another girl age five also sold 100! After 11 weeks, when they opened their beehive bank, 500 pennies came rolling out!18

A poem published in the children’s section of The Christian Science Journal told how the Bees could think about the work they were doing:

Don’t just sit and pray
For increase of your store,
But work; who will help himself,
Heaven helps more.
The weeds while you’re sleeping,
Will come up and grow,
But if you would have the
Full ear, you must hoe!19

In 1894, nearly four years after the Busy Bees began their fundraising efforts, the Original Mother Church edifice in Boston was complete.

When the Church was dedicated on January 6, 1895, the Busy Bees were invited to a special service held just for them. Each Bee was given a badge and an inscribed half-inch mosaic tile identical to the ones used for the floor in Mother’s Room. And all the Bees were given a tour of the room they had helped build.20

Mrs. Eddy prepared a talk for the day, and in it was an especially sweet message for the Bees. She told them: “Sweet society, precious children, your loving hearts and deft fingers distilled the nectar and painted the finest flowers in the fabric of this history, — even its centre-piece, — Mother’s Room in The First Church of Christ, Scientist, in Boston. . . . Ah, children, you are the bulwarks of freedom, the cement of society, the hope of our race!”21

Mary Baker Eddy was deeply moved by the unselfish efforts of the Busy Bees. “I consider what they have done so beautiful and self-sacrificing,” she wrote Maurine, “that I want it to be sacred from all other history that they did this for Mother.”23

For their good work, the Busy Bees received a special reward: Mrs. Eddy dedicated a very important book to them. The book is called Pulpit and Press, and includes, among other things, her Dedicatory Sermon from January 1895. Do you know where to find this book? One place is in Mary Baker Eddy’s Prose Works.

Eventually, the work of the Busy Bees was complete, and Mrs. Eddy requested that the group disband. “Charity begins at home” she wrote them, knowing that their efforts would be needed to support family and local communities, and saved for future education.24 As a final gift to the Busy Bees, Mrs. Eddy invested $4,000 in municipal bonds, the proceeds of which were divided and given to each Bee.25

Years later, Maurine Campbell thought about what became of the Busy Bees when they grew up. Some went on to serve as Readers in Christian Science churches, and others became Christian Science practitioners, teachers, and lecturers. “As men and women grown, their work has expanded over a busy world, and they are still disseminating the honey gathered from spiritual flowers—giving their best to our dear Cause.”26 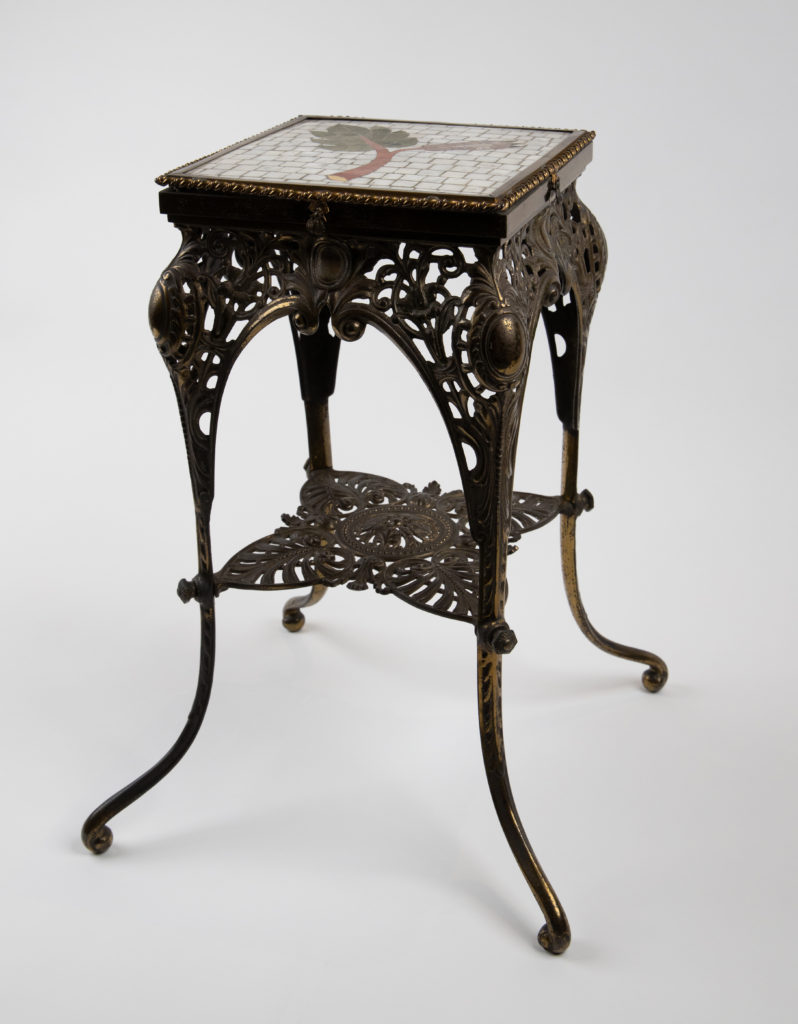 After Mother's Room was completed, Miss Campbell had three small tables made as mementos. The tops were of the same mosaic pattern as the flooring in Mother’s Room. Maurine gave one table to Mrs. Eddy, who used it in her home. Longyear Museum Collection. 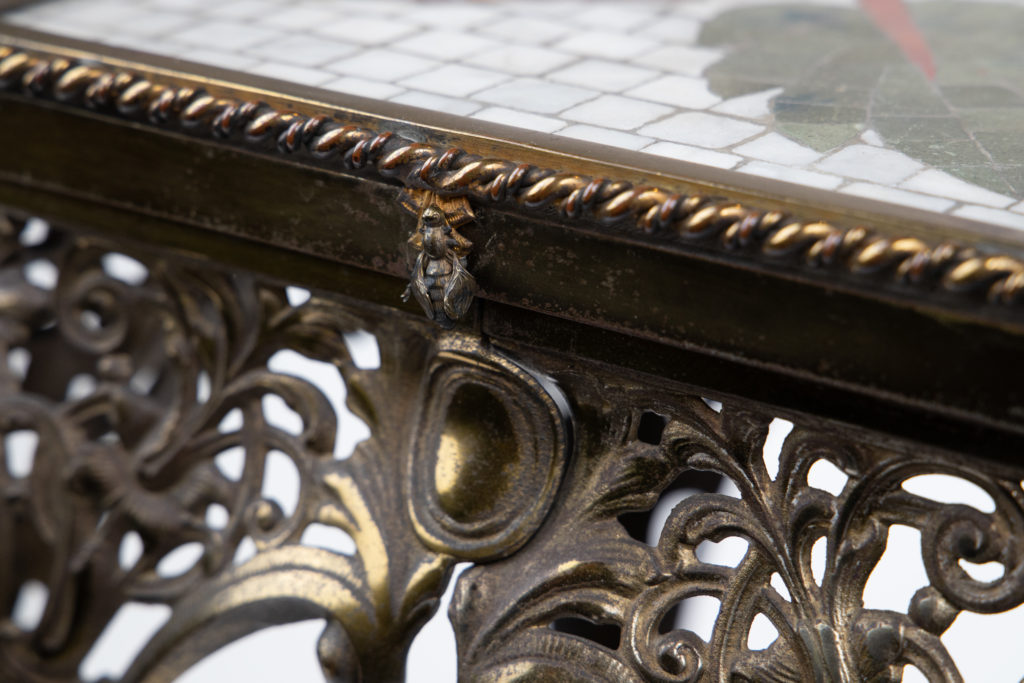 Here’s a close-up of the table. Can you spot a bee? 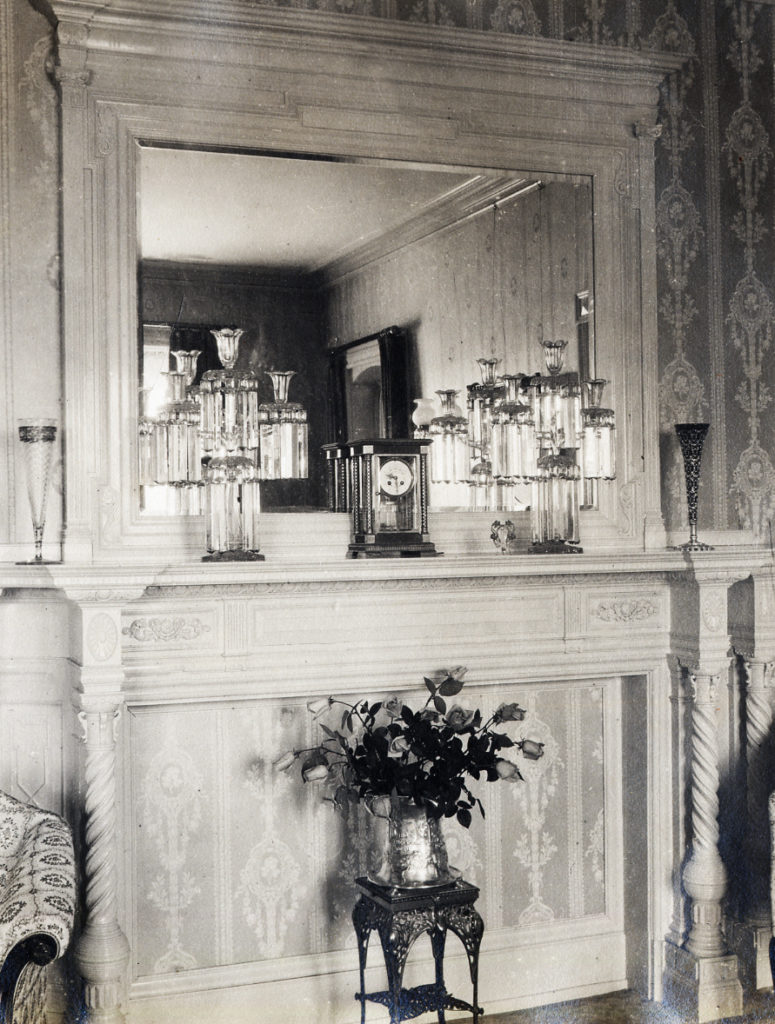 Can you find the table in the photograph of Mrs. Eddy’s living room? Longyear Museum Collection. 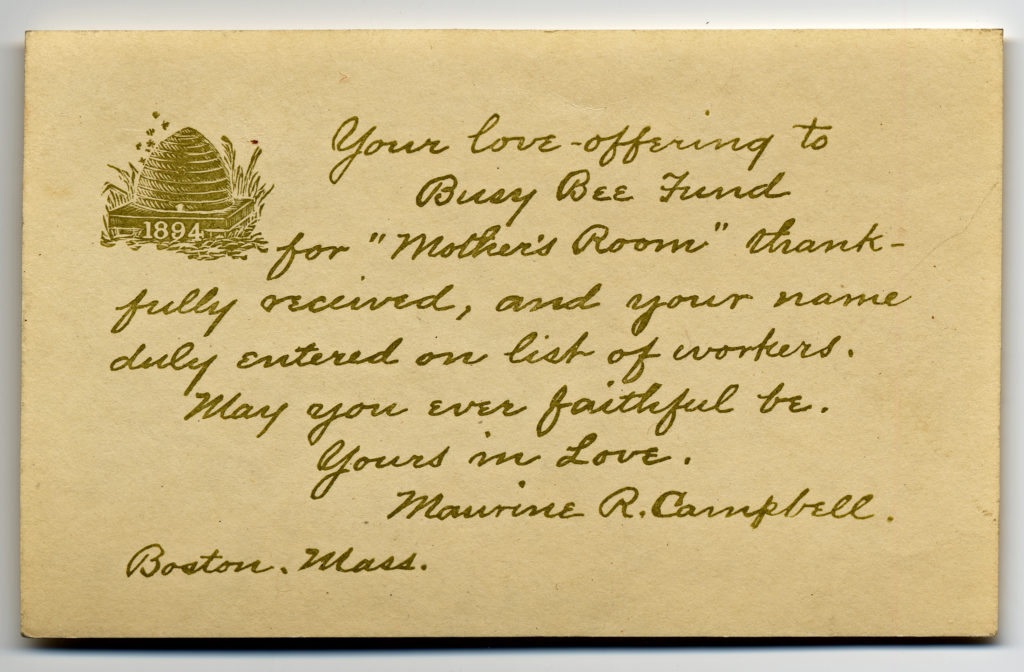 This gratitude letter was sent on receipt of funds sent to the children’s church building fund. Longyear Museum Collection. 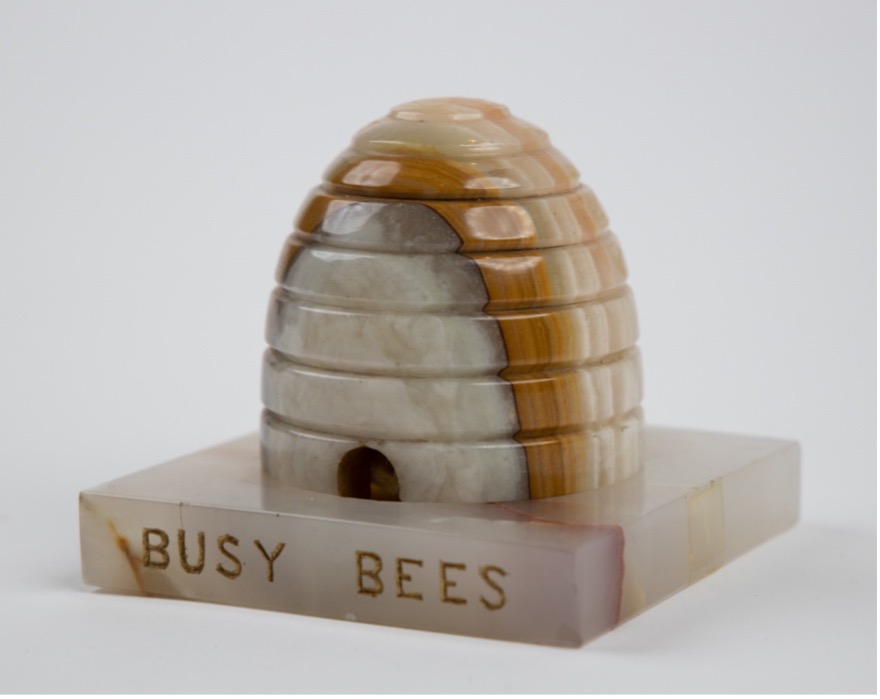 Busy Bee alabaster beehive. Mrs. Eddy also owned a version of this that she kept on a special shelf. Longyear Museum Collection. 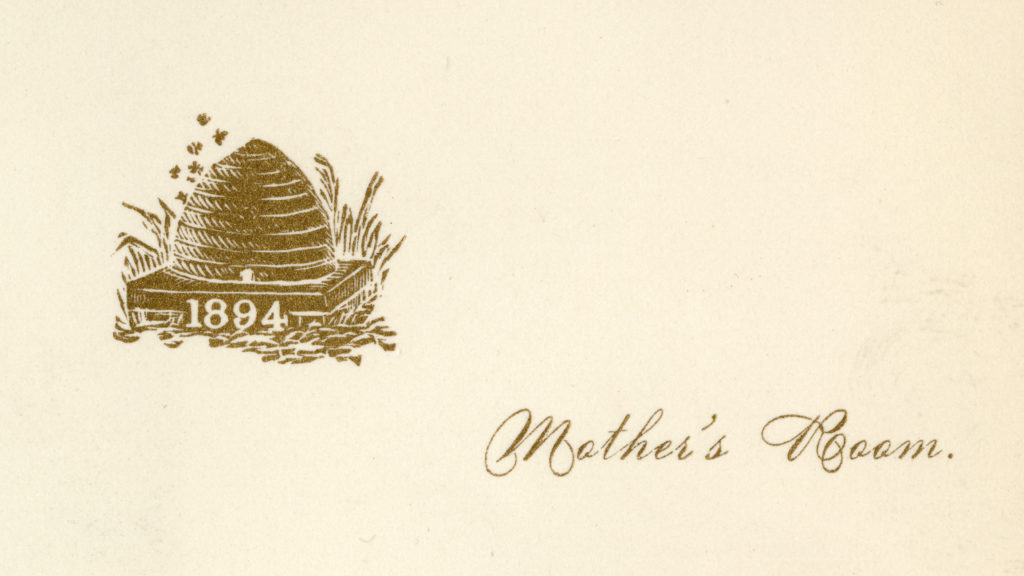 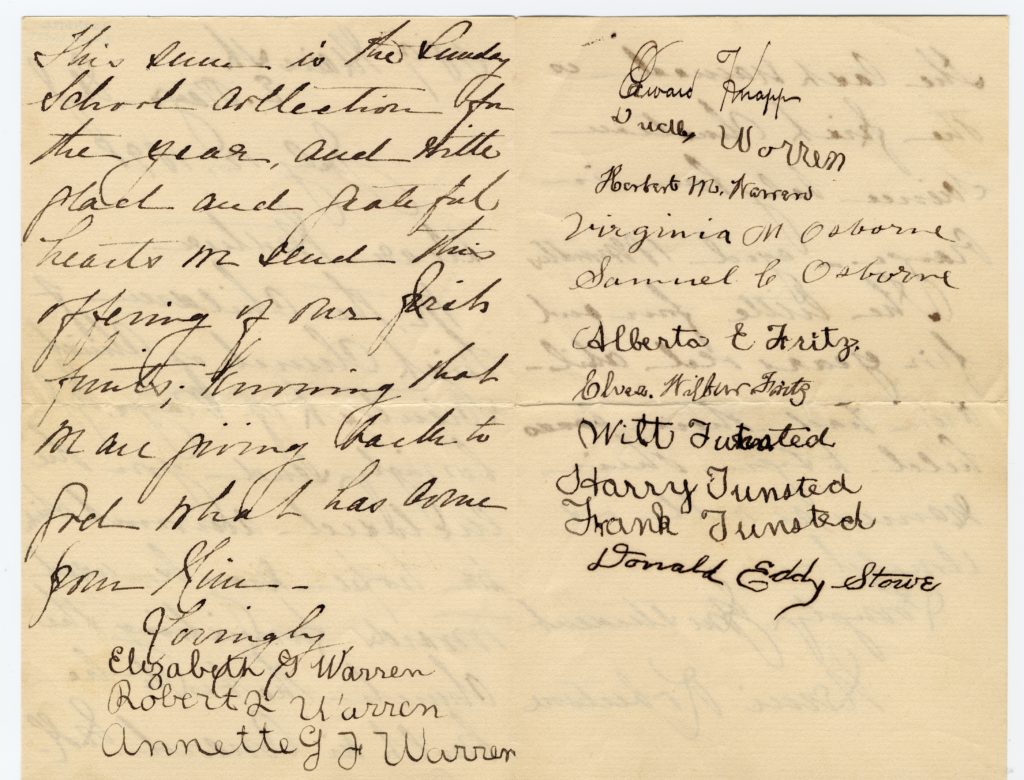 After the church in Boston was built, Busy Bees continued to send funds to help build a church in Concord, New Hampshire. The Sunday School students of East Orange, New Jersey, sent a letter and a contribution to that building fund on July 12, 1898. “We are giving back to God what has come from Him,” wrote the children, along with their personal signatures. Longyear Museum Collection. 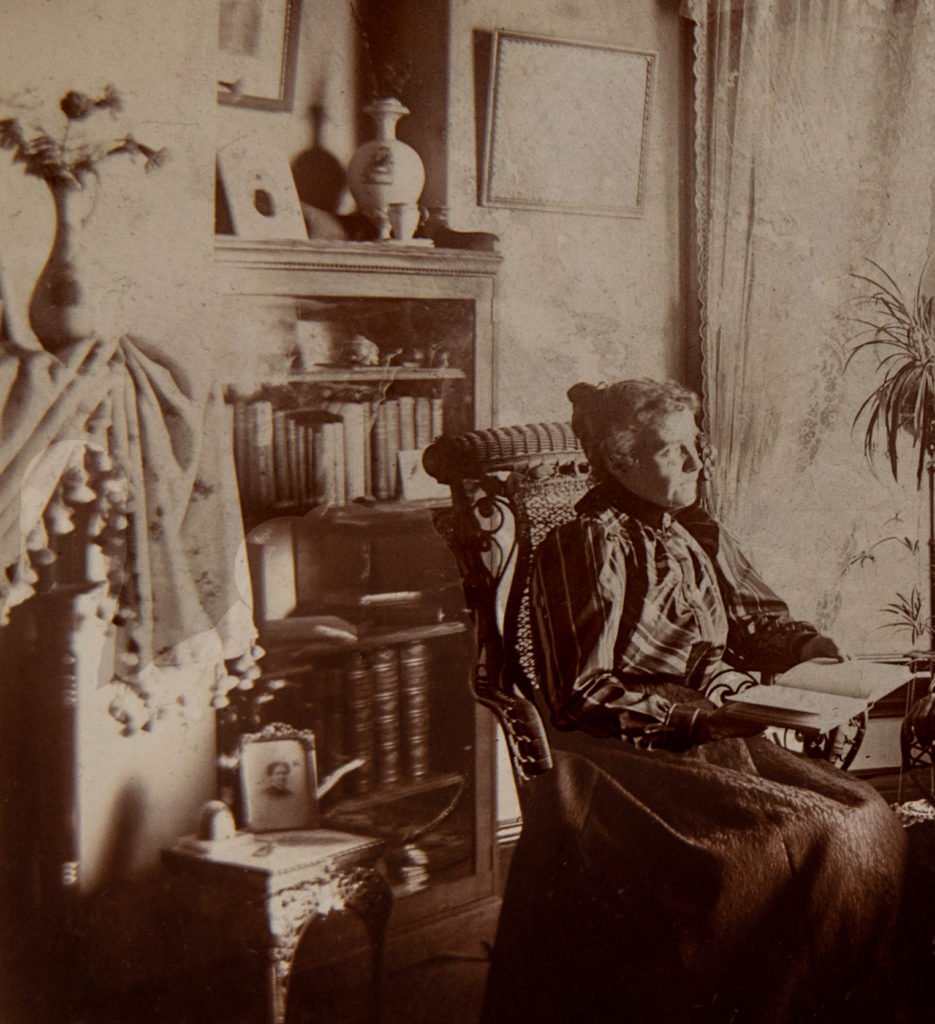