CAROLINE S. BATES, daughter of a New Haven, Connecticut, physician, had suffered for years from many ills. Told that she wouldn’t live much longer, she went to an artist in the summer of 1885 to have a portrait of herself made for her husband as a remembrance. While at the studio, a copy of Science and Health was handed to her, and after reading just a few pages she found herself completely healed. Mrs. Bates and her husband became sincere students of Christian Science, holding church services in their home and attending, along with Caroline’s parents, Primary class with Mrs. Eddy in early 1887. Caroline became a practitioner, as did her father, Dr. Henry Ives Bradley, who had abandoned his medical practice following his daughter’s healing. Caroline and Edward went on to attend Normal class with Mrs. Eddy in October 1887, although only Edward became a teacher. Mrs. Bates faithfully and courageously assisted her husband when he was called to Boston in 1894 to help supervise the on-site work during the final phases of construction of the Original Edifice of The Mother Church. In Pulpit and Press (9), Mrs. Eddy makes this reference: “Woman, true to her instinct, came to the rescue as sunshine from the clouds; so, when man quibbled over an architectural exigency, a woman climbed with feet and hands to the top of the tower, and helped settle the subject.” This woman was Caroline Bates. 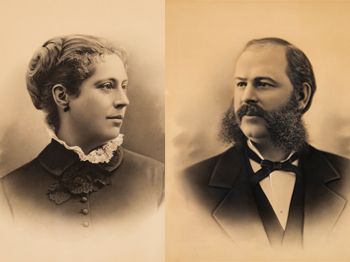 Communion and the Communion Season

Landmark Reorganization of the Church (1892)