“Accept my thanks for your beautiful holiday gifts, and my warm wishes for your happiness and prosperity,” wrote Mary Baker Eddy in The Christian Science Journal of January 1888 under the heading “Christmas Joys.” During the 1887 holiday season, she had received some 50 gifts from her students and followers, gifts which, she said, “gladdened my Christmas.”1

Among them was a handsome mantel clock sent to her by Hannah Larminie, a Christian Science practitioner from Hyde Park, Illinois. Hannah had received instruction from Mrs. Eddy at the Massachusetts Metaphysical College three times in as many years.2

“May all joy and peace be yours, this Christmas time!” Hannah wrote in a letter to her teacher that accompanied the gift. “The real Christmas is nearer to us today than ever before, and we can rejoice with you now, in a fuller understanding, trusting that ere long we may come into the full joy of the new birth in Christ. God is surely with us, and we have every reason to be glad.”3

Hannah told Mrs. Eddy, who called the timepiece “interesting,”4 that it was modeled after a clock tower in Lausanne, Switzerland, she and her husband had visited, and that it was unusual in that it gave the “time, times, and half a time,” as she put it, quoting the book of Revelation. “I trust it will be a witness of the destruction of all times,” Hannah added, “so that we may enter into the joy of eternity.”5 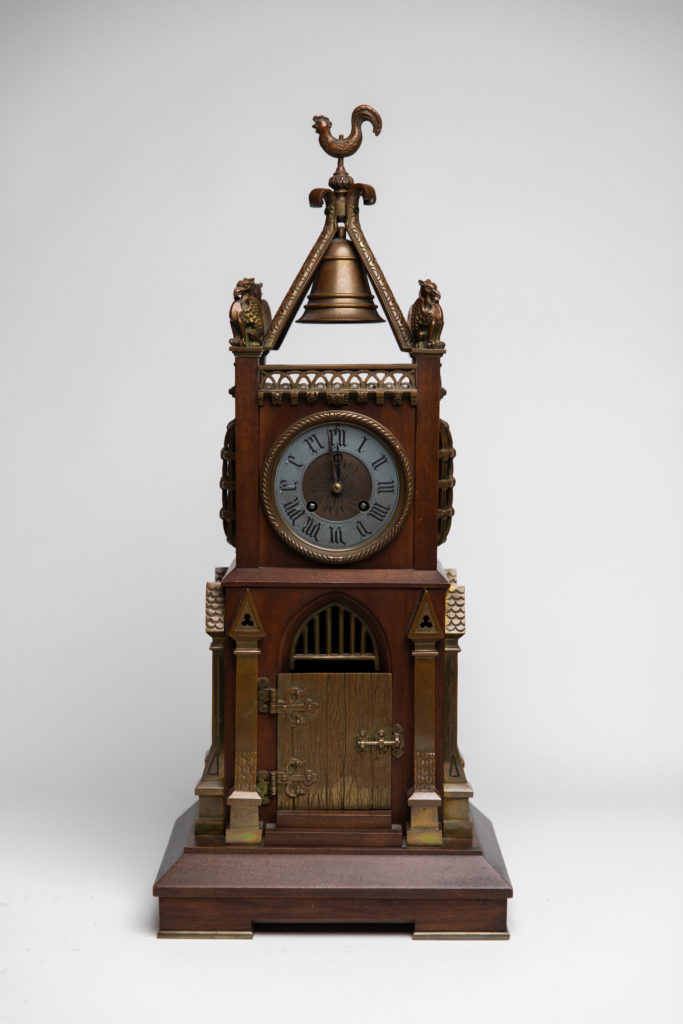 This architectural clock tower has a walnut case and is modeled after a clock tower in Lausanne, Switzerand. Decorative item, 2018.033.0041, Longyear Museum collection. 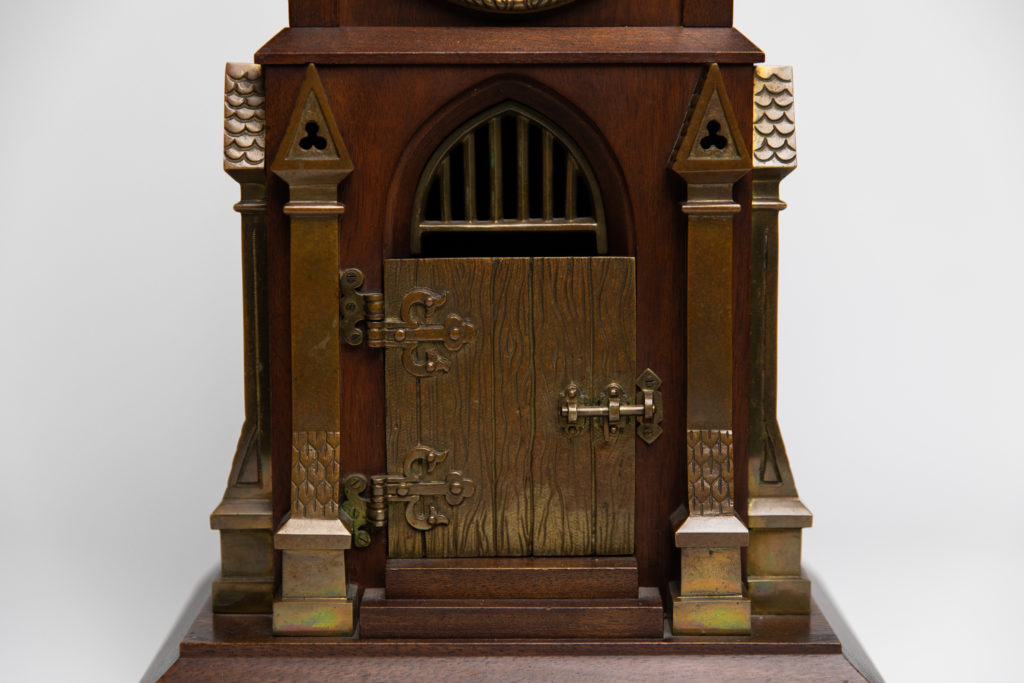 Details include handsome bronze fittings and a working latch door. 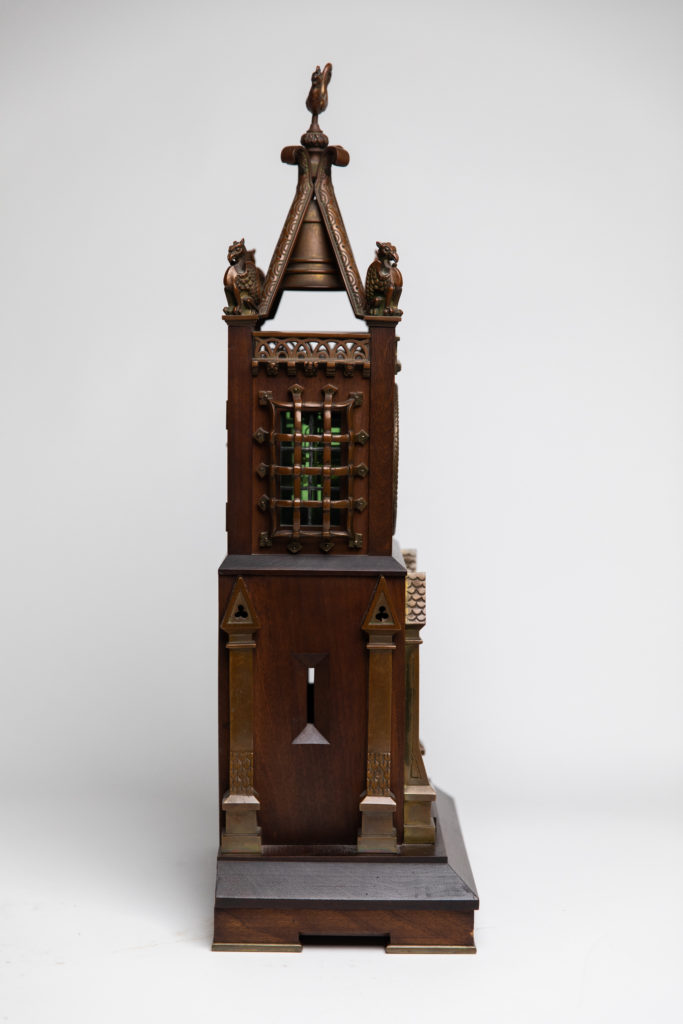 The clock tower has leaded glass side lights. 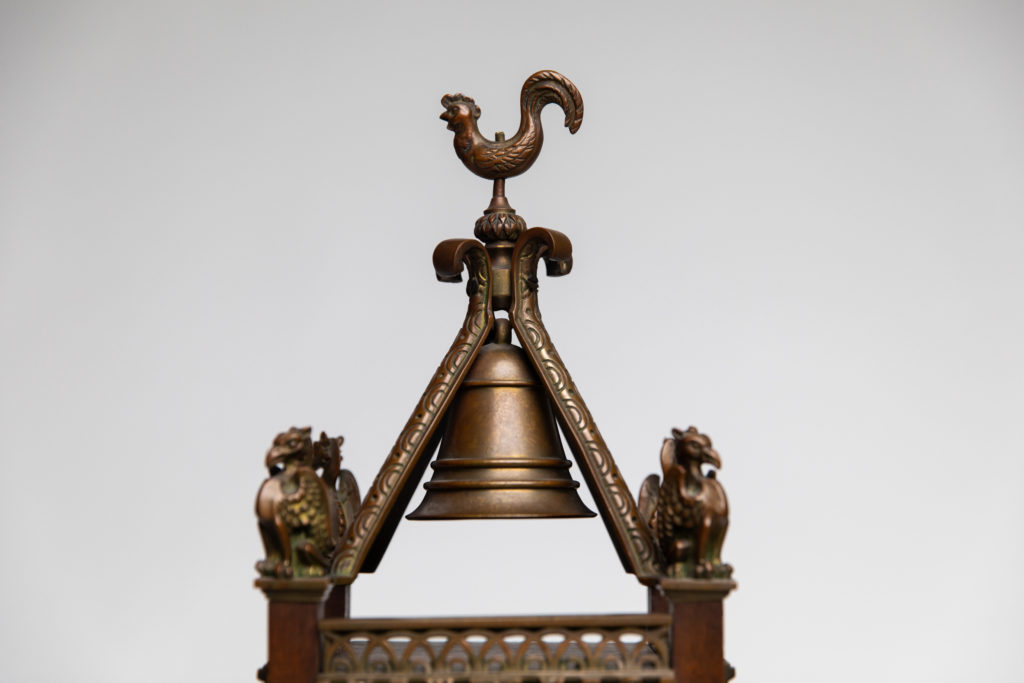 The steeple structure is crowned with a bell, griffins, and a rooster finial.

Hannah Larminie’s Christmas gift to Mrs. Eddy would grace the library at Pleasant View, Mrs. Eddy’s home in Concord, New Hampshire, and later the second-floor hallway of 400 Beacon Street, her final home in Chestnut Hill, Massachusetts. The clock was among the numerous items given to Longyear recently by The Mother Church, The First Church of Christ, Scientist, in Boston, Massachusetts, as part of several gifts of artwork and decorative and household items from 400 Beacon Street.

Another gift that Mrs. Eddy publicly acknowledged in that issue of the Journal was an “exquisite engraving, The Repose in Egypt, elegantly framed.”6 Given to her by Mary Bradford, a Christian Science teacher from Boston, it depicts Mary and Joseph’s flight into Egypt after the birth of Jesus. The artwork would hang in the library at Pleasant View and later in the first-floor hall at Chestnut Hill, and it was also among the items given to Longyear by The Mother Church.

For several years, Mrs. Eddy used the pages of the Christian Science periodicals to publicly thank her gift givers for their thoughtfulness. By 1889, however, she would strike a different note, gently nudging her students and followers in a different direction.

“This year, my beloved Christian Scientists, you must grant me my request, namely, that I be permitted total exemption from Christmas gifts. Also I beg to send to you all a deep-drawn, heart-felt breath of thanks for those things of beauty and use forming themselves in your thoughts to send to Mother. Thus may I close the door of mind on this subject, and open the volume of Life on the pure pages of impersonal presents, pleasures, achievements, and aid.” 7

While the lengthy lists of gift acknowledgements in the periodicals waned, despite Mrs. Eddy’s direction her students’ enthusiasm for sending Christmas gifts did not – at least not right away. Bradford Sherman, for instance, a practitioner and teacher from Chicago whose hobby was painting, sent her an oil painting shortly after her new directive was issued.

Back in the summer of 1884, he’d given her a painting titled “Isle of Wight,” which had sparked a poem in response.8

And in 1887, the same Christmas that Hannah Larminie and Mary Bradford sent their gifts, he gave Mrs. Eddy another – a seascape that she praised as “grand.” The artist himself described it as “an ideal picture of the ship Christian Science nearing the port, leaving the rocks, shadows, and shoals of mortal belief behind.”9

Like “Isle of Wight,” the seascape also inspired a poem of gratitude from Mrs. Eddy, this one published in The Christian Science Journal of January 1888.10

Perhaps in hopes of coaxing a third poem from her, Mr. Sherman sent along “Winter Landscape” the following year, in 1889. A depiction of John Greenleaf Whittier’s New England birthplace, it touched a chord in his teacher. Years earlier, while living in Amesbury, Massachusetts, shortly after her discovery of Christian Science, she had healed the renowned poet of an illness. And she was also a lifelong fan of Whittier’s poetry, including his well-known narrative poem, Snow-Bound: A Winter Idyl, published in 1866, the same year that she experienced her landmark healing.

“I look at Whittier’s Birthplace,” she wrote in The Christian Science Journal of February 1890, “an oil painting by Bradford Sherman, beautifully framed—and wonder if ever poet and painter met more warmly with pen and brush in so frigid a scene as this illustration of the inimitable poem ‘Snow Bound.’”11

Mrs. Eddy placed the oil painting in the guest room at Pleasant View, where all her visitors could admire it. With the move to Chestnut Hill, it found a new home in Calvin Frye’s office. Today, along with “Isle of Wight,” Mr. Sherman’s “Winter Landscape” is part of Longyear’s collection. (The whereabouts of the seascape is unknown at this point in time.)

As the years progressed, Mrs. Eddy moved away from public thanks for holiday gifts that she received. But her appreciation didn’t stop, and she continued to pour her gratitude onto the page through her pen.

“My thanks though late are fresh and the birds’ bells of China lie in my library,” she wrote to two of her students in January 1903.12

Sarah Pike Conger, wife of United States Minister to China Edwin Conger, along with her friend Maurine Campbell, had sent a Christmas gift of a set of seven dome-shaped bells and a striker. Today, these, too, are part of Longyear’s collection, thanks to the generosity of The Mother Church.

More than the gifts themselves, however, what Mrs. Eddy truly prized was the love behind them.

“The value . . . consists largely in the thoughts which these beautiful things express,” she wrote. “The tender heartthrobs of vital cooperation that they bring give me strength and faith in the future; they assure me that the few faithful adherents to Christian Science will be found equal to sustain our cause; and the love wherewith they have loved me was kindled from the divine Source, that replenishes it, and will extend its healing power over all the earth.”13