Ever since childhood, Mary Baker Eddy had an affinity for poetry.

“The writing of poetry has always been a joy to me,” she told one of her secretaries. “As a child I was always rhyming, and it is much easier for me to write verse than prose.”1

Although prose would become Mrs. Eddy’s main form of writing, she was a prolific poet first. By 1875, the year that the first edition of Science and Health with Key to the Scriptures was published, more than 60 of her poems had already been published in newspapers and magazines.2 Later on, she wrote seven poems that became hymns in the Christian Science Hymnal, published an illustrated poem entitled Christ and Christmas, as well as a collection of poems. Some of her poems came swiftly, while others were written and edited over decades.3

Mrs. Eddy not only wrote poetry, but she also appreciated the work of other poets, and sometimes gifted poetry books to students and friends. In January 1890, for example, she gave a unique poetry book titled Log-Book-Notes Through Life, by Elizabeth Little, to her faithful student Joseph Eastaman, a former sea captain. The beautifully-illustrated volume contains poems about the sea as well as intricate pen-and ink-sketches of maritime scenes. Lucy Larcom, Helen Hunt, and J. W. Chadwick contributed to the book’s text.4 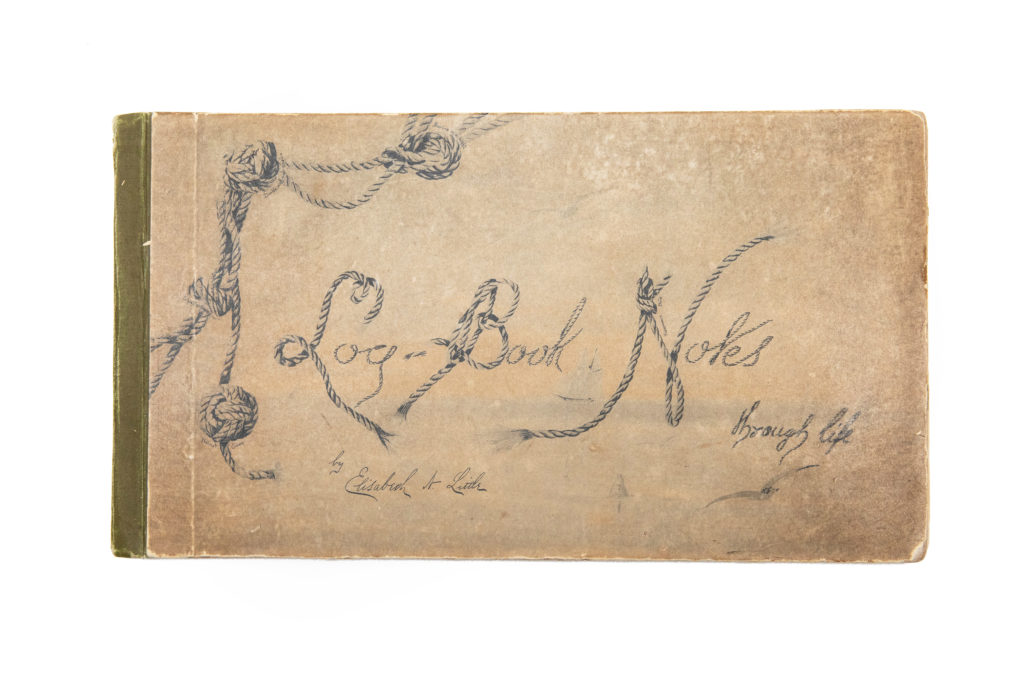 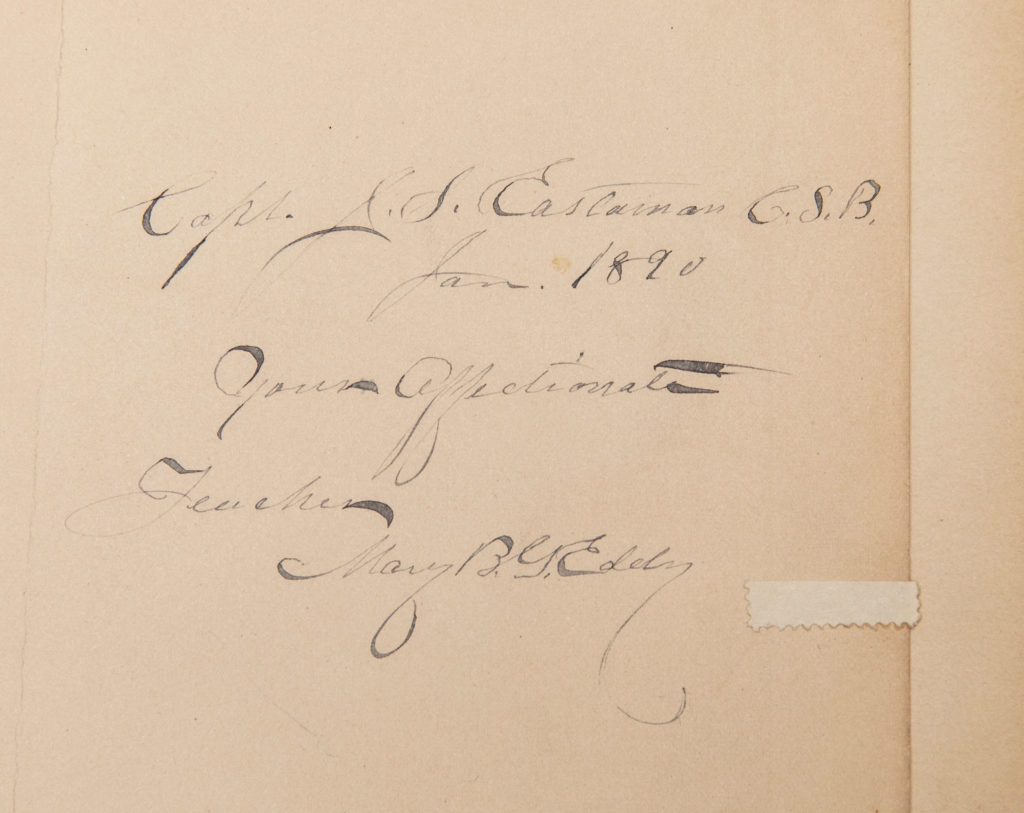 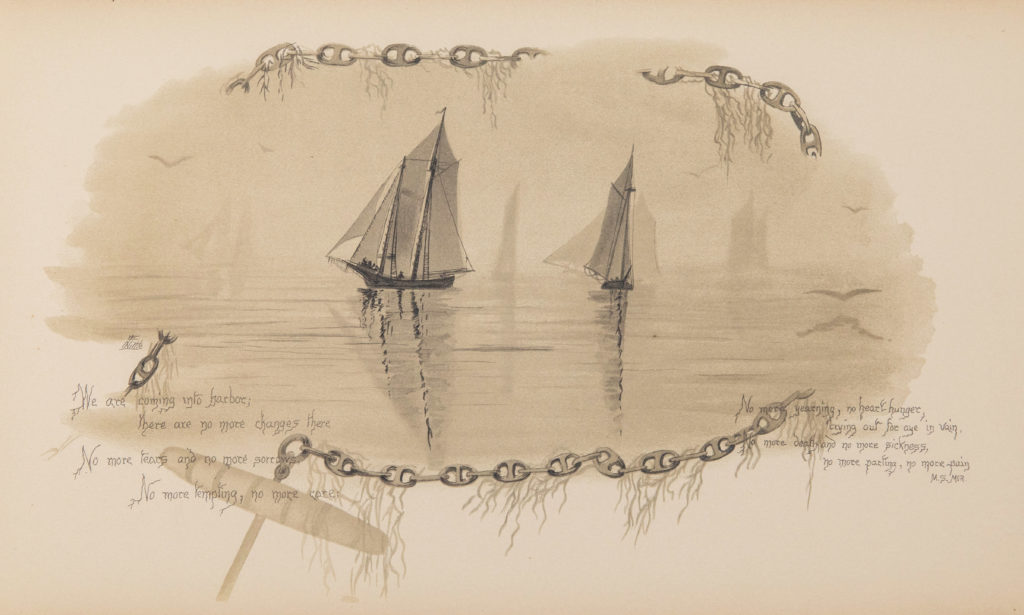 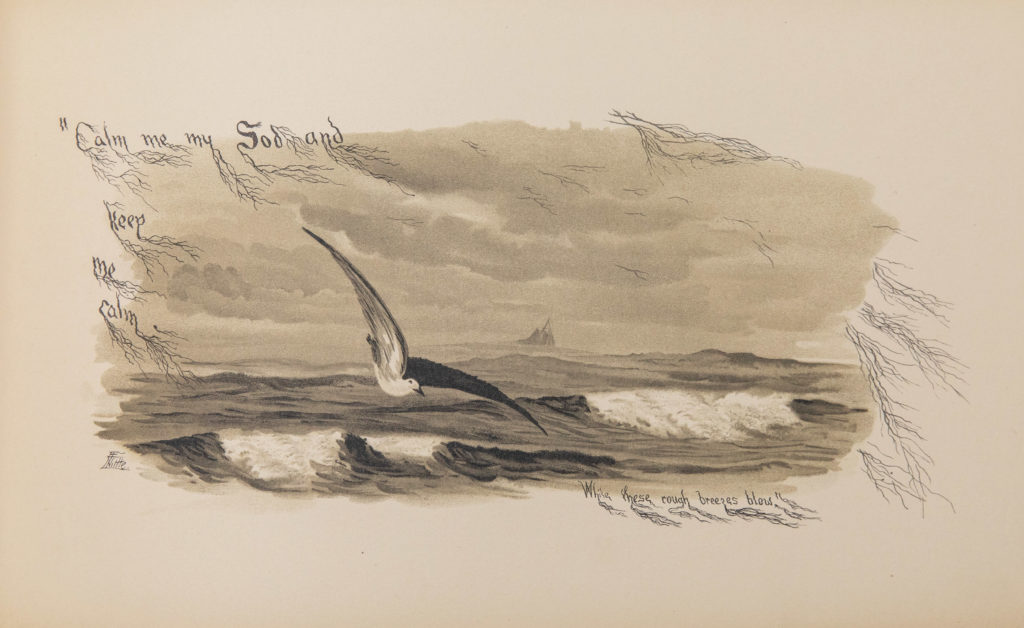 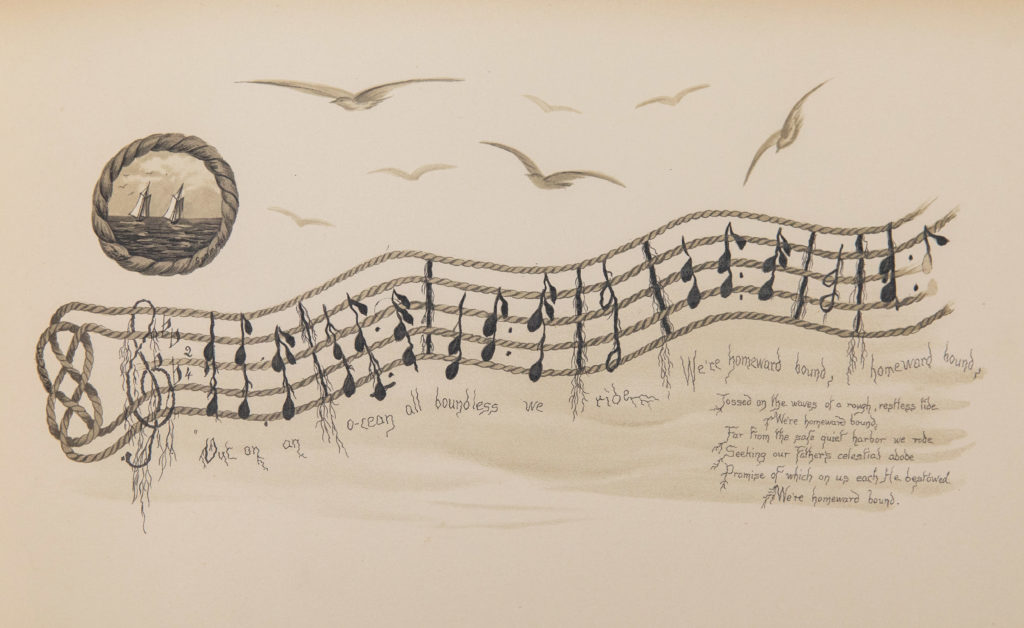 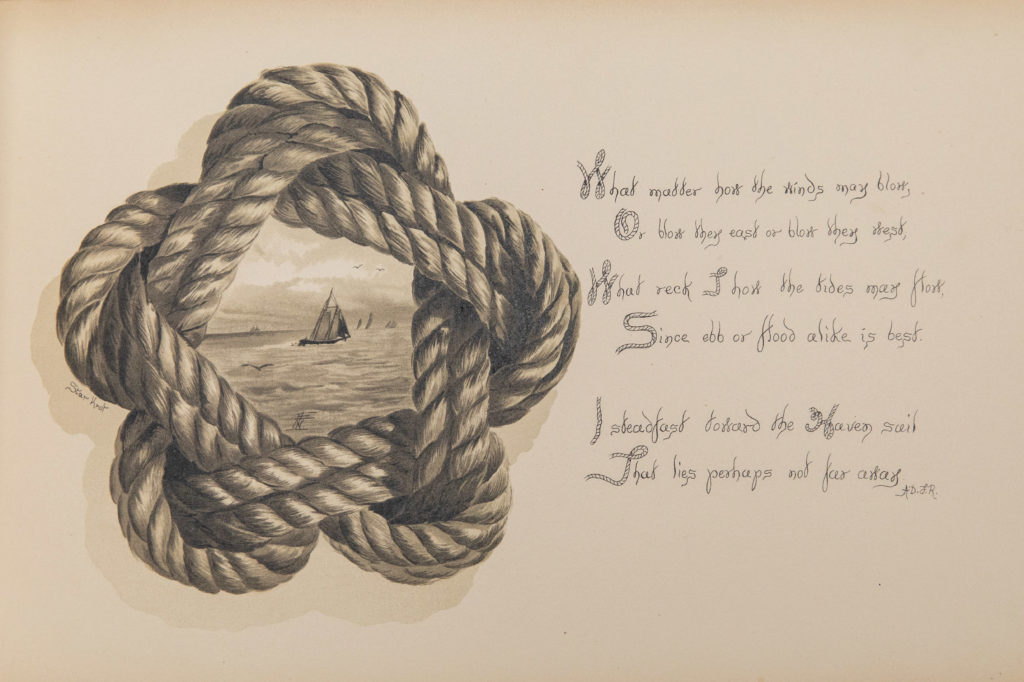 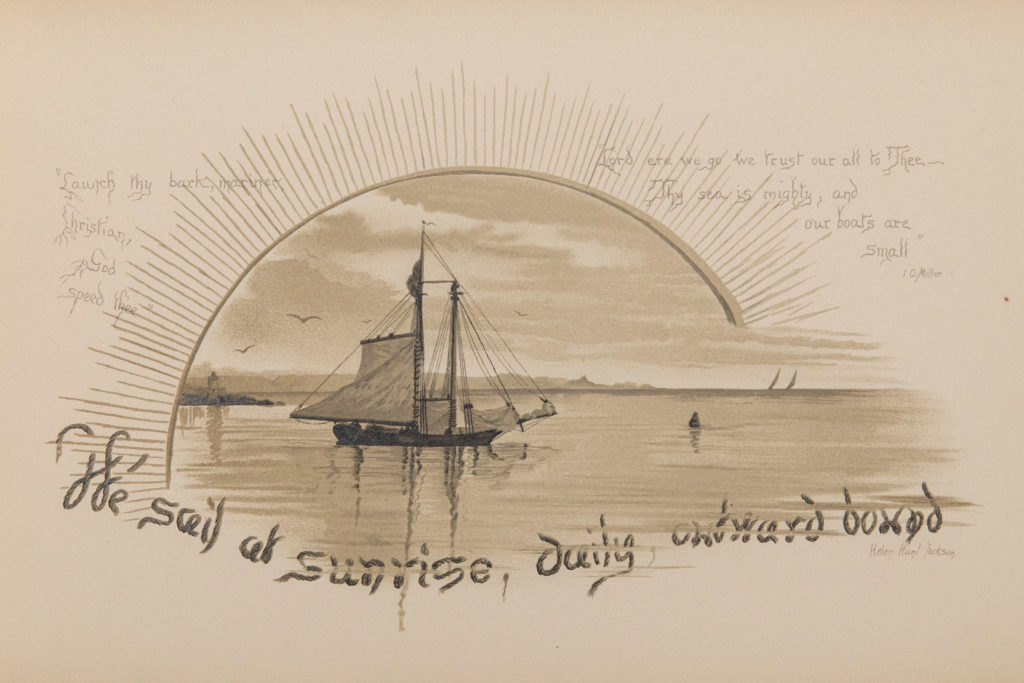 Mrs. Eddy had first encountered Miss Larcom, a well-known poet and author of her day and a protégé of John Greenleaf Whittier, two decades earlier while living in Amesbury, Massachusetts. Later, Lucy’s poetry would appear occasionally in the Christian Science periodicals.5

Another gift of poetry from Mrs. Eddy was an illuminated verse from John Greenleaf Whittier’s The Quiet Room which she gave to Minnie Scott, who cooked for her at Pleasant View and Chestnut Hill. Mr. Whittier, one of the most famous poets of his day, lived in Amesbury for much of his life, and he met Mrs. Eddy on several occasions when she lived there in 1868 and 1870. At their first meeting, Mrs. Eddy healed him of incipient pulmonary consumption, and a literary friendship sprang up between the two writers. Mrs. Eddy sent Whittier an early teaching manuscript in 1872, followed by a first edition of Science and Health. Later, eight of his poems were set to music and published as hymns in the Christian Science Hymnal.

“One of Concord’s thorough scholars”

When Mrs. Eddy lived in Concord, New Hampshire (1889 to 1908), one of her neighbors was author, editor, proofreader, printer, and poet Edward Augustus Jenks. Mrs. Eddy thought highly of Mr. Jenks and his work, and occasionally employed him to review her own writing.6

In early 1899, Mrs. Eddy invited Mr. Jenks to visit Pleasant View to read aloud several poems from his volume of verses, The Spinning-Wheel at Rest. One of the poems that he was asked to read was Going and Coming. According to Irving Tomlinson, one of Mrs. Eddy’s secretaries at the time, Jenks thought the poetry reading was a test to determine the quality of his work. If that was so, it would seem that he passed muster, because as soon as the reading was over, Mrs. Eddy wrote Septimus and Camilla Hanna, editors of the Christian Science periodicals, asking them to publish her “favorite poem,” Going and Coming, in the Journal. She added, “Mr. Jenks is one of Concord’s thorough scholars.”7

Mrs. Eddy was given an inscribed copy of “Spinning-Wheel at Rest” by the author, and it appears it was a book she valued highly, as it was among the items that she took with her when she moved from Concord to Boston in 1908.9

An excerpt from Going and Coming reads:

Coming to join our march—
Shoulder to shoulder pressed—
Gray-haired veterans strike their tents
For the far-off purple west,
Singing!

“As a writer of prose and poetry,” Mrs. Eddy wrote of Jenks to the Hannas in 1899, “he is terse, logical, ideal. You will not find him on the wrong side of philanthropy, ethics, or religion.”11

“A pearl of poetry”

Another notable poet and publisher whom Mrs. Eddy befriended was James Terry White, who published a 63-volume series titled “The National Cyclopaedia of American Biography.” The series was meant to capture “the history of the United States as illustrated in the lives of the founders, builders, and defenders of the Republic, and of the men and women who are doing the work and moulding the thought of the present time.”12 The third volume contained a biographical sketch of Mary Baker Eddy, along with two portraits.

Mrs. Eddy spoke highly of the book, describing it as “original in its expert arrangement,” and “of high importance as a book of information and reference,” and said that she hoped “every Christian Scientist will have it.”13

In the spring of 1894, White sent Mrs. Eddy an Easter poem, which she declared “a pearl of poetry.”14 Shortly after, he sent her another – a rondelet this time, which is a seven-lined poem with a precise meter, syllable count, and intentional repetition:15

Mrs. Eddy responded with a poem of her own, entitled “To Mr. James T. White:”

Who loves not June,
Is out of tune
With love and God;
The rose his rival reigns,
The stars reject his pains,
His home the clod!

And yet I trow,
When sweet rondeau
Doth play a part,
The curtain drops on June,
Veiled is the modest moon,
Hushed is the heart.17

The two writers would continue to correspond over the years, and many of Mr. White’s poems were published in the Christian Science periodicals.18

1897 was a big year for both Mary Baker Eddy and James Terry White in terms of literary output. In February, Mrs. Eddy published Miscellaneous Writings. She sent Mr. White a copy.

“I find much that fills me with admiration, and delights my soul,” he replied to her in May. “I have always been an attentive listener to your words, and find much food for reflection, besides help and comfort.”19

Later that year, White published a book as well. The beautifully-illustrated Captive Memories was dedicated to his fellow writer and friend of many years, Mary Baker Eddy.

Initially, Mrs. Eddy wrote of the book: “It is perfect in its make-up, chaste, and a lesson learned heavenward.”20 In the end, however, she was disappointed when Mr. White added a picture of her to its pages. Though the two writers would lose touch after the book’s publication, Mrs. Eddy appears to have still valued it, for Captive Memories also found a place on the bookshelf in her study at 400 Beacon Street.21