Next Up: A special Church Manual comes to Longyear

The musical instrument in the “Garden Room” of the Mary Baker Eddy Historic House in Amesbury, Massachusetts, has been referred to as a melodeon for at least a century. But when organ restoration expert Joe Sloane recently examined and cleaned it, he fine-tuned Longyear Museum’s understanding of when and how the instrument was built, and suggested that “melodeon” might not be the most historically accurate name.

In 1920, Mary Beecher Longyear first stepped inside the house where Mary Baker Glover had taken refuge with Sarah Bagley in 1868, two years after discovering Christian Science. Mrs. Longyear’s first impression: “The flowered carpet, the gay wallpaper, with the bright face of Miss Sarah Bagley – smiling from an oval-framed photo – . . . greeted us. The mahogany melodeon and table, the beautiful old mirror, the antique chairs, all seemed modestly to say, ‘A lady lived here.’”1

Since the Amesbury instrument has no builder’s nameplate or signature, Joe, who does his restoration work in Waltham, Massachusetts, had to piece together clues to trace its origin. He concluded that someone handcrafted it between 1840 and 1845. The first reed organ identified as a melodeon was built in 1847.

The development of such instruments was rapid in the mid-1800s, Joe explains. The Amesbury organ could have been constructed by someone with furniture-making experience, or by an apprentice in organ building. For instance, he adds, an inventor by the name of James Bazin built several similar reed organs in his Canton, Massachusetts, shop in the 1830s. Bazin called them “seraphines.”

It turns out that the instrument is made not of mahogany, as Mrs. Longyear supposed, but of walnut and eastern white pine.

Bagley family papers offer great insight into what life was like before, during, and after Mrs. Eddy’s stay in Amesbury. But thus far no details about the instrument have come to light.

Music has been an important metaphor in Christian Science since Mrs. Eddy’s discovery. A letter in Sarah Bagley’s handwriting that appears to have been a collaboration with Mrs. Eddy speaks of “the science of music, perfect and harmonious, no discordant jars, no inharmonious strains,” and then adds, “but the instruments become broken, or discordant. Is the principle of music at fault?… Is not the same rhythmic chant pealing peace to God’s children that resounded 1800 years ago? Is there any less harmony now than then?”2

When she moved from Amesbury to Lynn, Mrs. Eddy often sang hymns, accompanied by a melodeon, with those attending public meetings on Christian Science. Years later, while visiting The Mother Church, Samuel Putnam Bancroft thought back to those early days and “the little melodeon on which my wife played, and of my own feeble attempts to lead the singing.”3

In her first address in The Mother Church, Mrs. Eddy told her followers, “Music is the harmony of being; but the music of Soul affords the only strains that thrill the chords of feeling and awaken the heart’s harpstrings. Moved by mind, your many-throated organ, in imitative tones of many instruments, praises Him; but even the sweetness and beauty in and of this temple that praise Him, are earth’s accents, and must not be mistaken for the oracles of God.”4

Longyear collections assistant and former music teacher Debbie Slade Pierce visited Joe Sloane’s workshop this fall to get a peek at the reed organ before it was fully reassembled. Joe showed her how it worked, and they were able to sample the sound by tapping a few small rods, called pitmans, which allowed air to flow in and over some of the brass reeds.

While he didn’t attempt to restore the organ to playing condition – doing so would destroy details that make it a rare object of historical significance – Joe did shore up the sagging bellows and tighten the legs, so that Longyear staff will be able to move the instrument with greater ease when it comes time to bring it home from storage to the renovated Mary Baker Eddy Historic House in Amesbury. 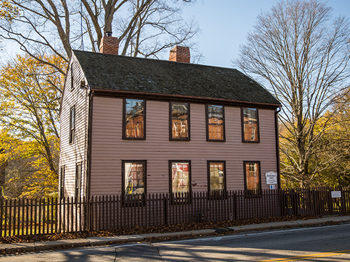 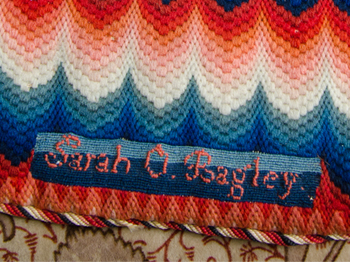