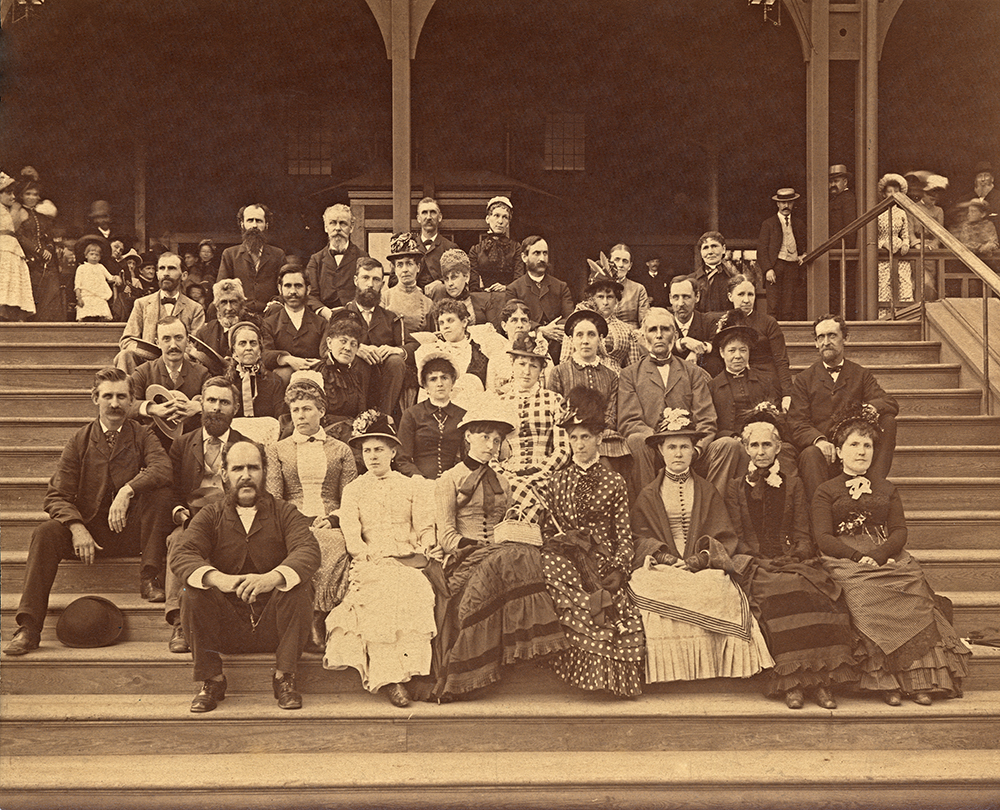 Dressed in their Sunday best in the heat of July, members of the Christian Scientist Association face the camera from the steps of a pavilion at the ocean-front park called Point of Pines, just south of Lynn, Massachusetts. A large part of the future of the Christian Science movement is seated here. There are those who would stand by Mary Baker Eddy, their teacher and Leader. And there are those who would fall away, attack her, or even seek to supplant her. They sit shoulder to shoulder in this snapshot taken in 1885 at a pivotal moment of history, when the Discoverer of Christian Science had just begun preparing her students to teach Christian Science.

Fourth of July: birth of the Christian Scientist Association

In July 1885, members of the Christian Scientist Association, centered in Boston, received a jubilant invitation: “The Association will celebrate their Ninth Anniversary on Thursday next, July 16th, by an Excursion to the Point of Pines, to which you and your family are cordially invited.” The Association of Mrs. Eddy’s students had been formed in Lynn, Massachusetts, on the centennial birthday of the United States, July 4, 1876. On this Thursday, nine years later, members and their families boarded trains bound for the ocean-front park (island, lower left) on the North Shore of Boston Harbor. 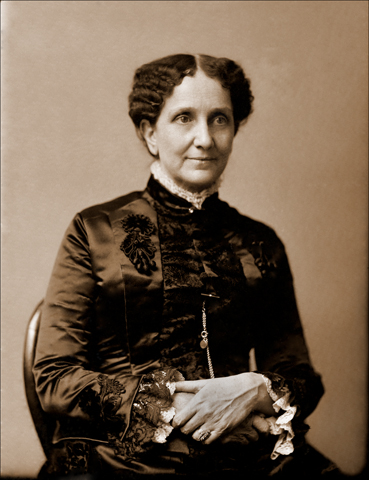 “Our Teacher will be present”

The invitation noted: “It is expected that our Teacher, Mrs. M. B. G. Eddy, will be present.” And she was. In addition to celebrating the Association’s birth date, the outing might well have been a party for Mrs. Eddy herself. That July day was her 64th birthday. Their teacher turned this day at the beach into an occasion for instruction, giving the company her thoughts on the spiritual symbolism of the sea. 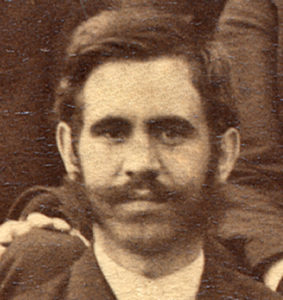 Hanover P. Smith: saved from a life of silence

At the time he sat for the group photograph, Hanover Smith had been able to hear and speak for just four years. He had been deaf and mute until 1880, when his mother brought him to Mrs. Eddy, who restored his hearing and speech. The grateful nineteen-year-old promptly entered her class in Lynn. In 1887, two years after this photo was taken, Hanover would launch into the public practice of healing. That same year, in a published monograph titled “Writings and Genius of the Founder of Christian Science,” he would eloquently express his profound appreciation for the woman who had saved him from a life of silence. 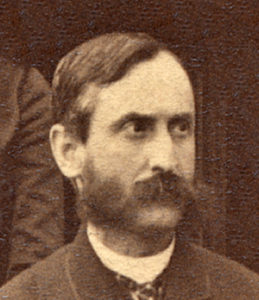 Calvin A. Frye: stayed the course

In a back row sat one of the staunchest of Mrs. Eddy’s helpers — her chief secretary and assistant, Calvin Frye. For twenty-eight years he would be perpetually at his Leader’s side. What mattered most in life to Calvin is suggested by a glowing entry in his diary for 1902: “Mrs. Eddy told me today that I have done more for Christian Science than any other person on earth except herself.” In 1881 Calvin’s mother had recovered from insanity through Christian Science treatment, leading Calvin to study with Mrs. Eddy. When Gilbert Eddy died a year later, Mrs. Eddy called for Calvin to join her staff and household in Boston. He came immediately, and never left. 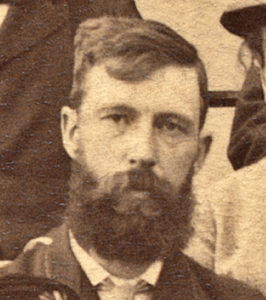 It was Arthur Buswell who, in 1882, had brought Mrs. Eddy to his summer home in Vermont, where she sought peace and solace after the death of her husband. Now, three years later, Arthur was chafing with resentment at the rising position of others — especially Calvin Frye. Five months after this picture was taken, he left the Association. Yet, even after he had dropped out, Mrs. Eddy described Buswell as “a specimen of the friendship that I value, that has some stick to it.” In 1906 his friendship faltered again as he contributed dubious details to magazines attempting to disparage Mrs. Eddy. Later, however, he would come to regret this and, in papers prepared about 1921 for Mary Beecher Longyear, would seek to correct the distorted image of Mrs. Eddy he had helped create. 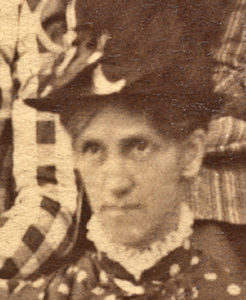 Julia S. Bartlett: a pillar of the Church

Unpretentious, down-to-earth Julia Bartlett was the polar opposite of the woman seated beside her at the Point of Pines picnic — the mercurial Emma Hopkins. In 1880 Julia, an often-bedridden invalid, had come to Gilbert Eddy for Christian Science treatment and had been healed. That very year she studied Christian Science with Mrs. Eddy. The year before this picnic, Julia had gone to Littleton, New Hampshire, where she had produced notable healings, treating up to seventy patients a day. Later that year she had become one of the first Christian Science teachers trained by Mrs. Eddy in her newly instituted Normal class. For some forty-five years, this unshakable pillar of the Church of Christ, Scientist, would devote herself to healing and teaching. 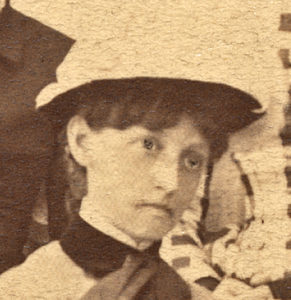 As young Emma Hopkins sat in the front row of this photograph, she was already mixing Christian Science with Eastern mysticism — steps that would lead her to break away from Christian Science and Mrs. Eddy to start her own school of “science” and healing. At the time of this picnic she was serving as editor of The Christian Science Journal, for which she wrote articles that praised her teacher with adoring reverence. But shortly after this celebration Emma would be removed from her position as editor, and in November she would leave the Association. In the years ahead she would found the Emma Hopkins College of Metaphysical Science in Chicago, set up in competition with Christian Science, and her classes, lectures, and writings would help initiate the New Thought movement.

Joseph S. and Mary Eastaman: two having a seafarer’s resolve

In the autumn preceding this picnic, Ship’s Captain Joseph Eastaman had returned from a voyage to find his wife Mary desperately ill and given little time to live. Christian Science was recommended to them. Having spent his life at sea, Joseph was a man of action. He went directly to Mrs. Eddy, who told him he should learn how to heal his wife himself. He promptly enrolled in her next class. By the final session, Mary was well enough to accompany him to class. Three months prior to this picnic, Mary, too, studied with Mrs. Eddy. As they sat for the group photograph, the Eastamans — both resolute survivors of the seafarer’s life — were becoming successful healers, and fast friends of Mrs. Eddy.

Barely three years after this photo was taken, William Bertram (l.) and John Murphy (r.) would lead a group of dissenters who felt that medical training could aid their practice of Christian Science healing. In 1888 Mrs. Eddy, despite her reservations, accepted the decision of these two men to enroll in a medical college. But the simmering dissension over the medical question boiled over in June, and Bertram and Murphy were among thirty-four rebellious members who bolted from the Association. Both men went on to become physicians. But Bertram would come to regret his defection, and nearly twenty years later would write to Mrs. Eddy of his continuing gratitude to her. 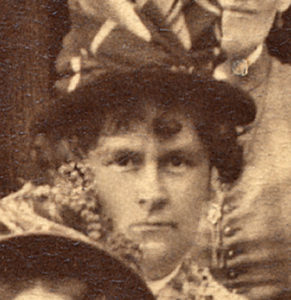 Janet Colman: a “fisher of men”

Half-hidden behind Susie Lang’s bonnet and self-effacing as always, sits one of the true builders of The Mother Church, Janet Colman. In contrast to the self-promoting Josephine Woodbury, seated behind her, Janet was modest, plain-spoken, warm-hearted, and trustworthy. She was to be a “fisher of men” who would fill a need for teachers in the West. Three months after the Point of Pines picnic, Janet set off for the West, where she would teach the first Christian Science class ever given west of the Missouri River. In the next four years, she and her husband toured the American West, where, through her classes, Janet recruited a corps of workers who would prove essential to the building up of the Church of Christ, Scientist, in Boston. 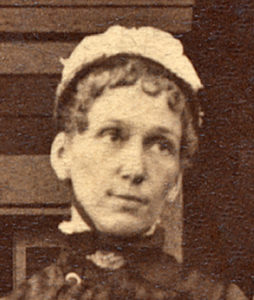 Josephine Woodbury: from advocate to adversary

At the time this picture was taken in 1885, Mrs. Woodbury was becoming an active presence in Boston and a vocal advocate for Mrs. Eddy’s teachings. But this volatile, willful sensualist would bring turmoil into Mrs. Eddy’s life and work. In 1889, four years after this Association picnic, as Mrs. Eddy took the first steps toward reorganizing her Church, Woodbury would withdraw from it and attempt to seize leadership of the healing movement. She attacked her former teacher with malicious magazine articles and eventually a lawsuit. The widely publicized suit dragged on from July 1899 until June 1901, when a jury quickly decided in favor of Mrs. Eddy. Defeated, Woodbury would later emigrate to England, where she would spend her remaining years as a hardened adversary of Mrs. Eddy. 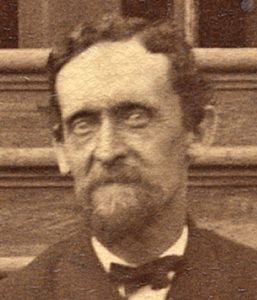 When the Civil War broke out, young William Johnson immediately enlisted in the Union infantry. Serving for three years, he suffered injuries and internal disorders. These continued to plague him long after he mustered out. In 1882 he sought the help of a Christian Science practitioner and was healed. Following class with Mrs. Eddy in 1884, William enlisted again — in the public practice of Christian Science healing. Patients were few at first. As he sat for the picnic photo, the Johnson household was staring poverty in the face. But William soldiered on. Within a couple of years his healing practice was thriving, and he was becoming invaluable to Mrs. Eddy. In 1892 she would name this modest foot soldier one of the first Directors of The Mother Church. 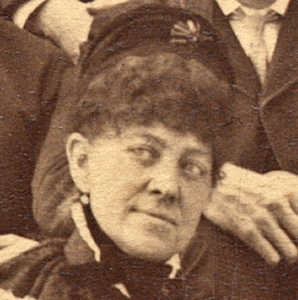 A trained elocutionist, Augusta Stetson entertained the gathering at the Point of Pines with two recitations. Mrs. Eddy thought highly of this brilliant student, and often called upon Augusta to substitute for her in the pulpit on Sundays. But later Stetson would attempt to monopolize Christian Science work in New York City and promote herself as Mrs. Eddy’s successor — the next Leader of Christian Science and its truest teacher. Mrs. Eddy was well aware of what she called Stetson’s “madness of ambition.” But she persistently tried to turn this promising woman back to “the simplicity that is in Christ.” In 1909, however, when documented reports revealed Augusta’s attempts to dominate her followers, injure all who opposed her, and declare herself Mrs. Eddy’s heir apparent, Mrs. Stetson would lose her Journal listing as practitioner and teacher, and would become excommunicated from The Mother Church.