At the time the church was under construction, Joseph Armstrong was a member of The Christian Science Board of Directors. He and other Directors were present at the laying of the cornerstone on May 21, 1894, — a date chosen by Mrs. Eddy. By October the building was considerably behind schedule, so Mr. Armstrong was appointed by Mrs. Eddy to take charge and devote full time to the work. The book relates how every imaginable obstacle was overcome in the period between the laying of the cornerstone on May 21 and December 30 of that year when the first service was held in the church. In the preface to his book, Mr. Armstrong wrote: “It seems desirable to preserve a record of at least a few of the trials, toils, and triumphs of this laborious effort, not only for the benefit of this age, but for the generations to come, which may be able to see more fully than we now can the meaning of this demonstration, and to realize that in the building of this church a Christian endeavor was successful.” (The Mother Church, p. vii, copyright 1968)1

As scribe of this momentous event he has become identified with the building of the Original Edifice. But his other contributions to the development of the Christian Science movement are also of such significance as to make one desire to know more about him and his wife, Mary.

Joseph Armstrong was reared in Carrollton, Illinois attending the public schools and Centre Academy. He was the son of Joshua Wilson Armstrong, a successful business man of that day, who was descended from Capt. John Armstrong. Capt. Armstrong had left Virginia after the Revolutionary War and settled in what is now Harrodsburg, Kentucky.

On November 6, 1878 Joseph married Miss Mary Perrin also of Carrollton. Like his parents, hers came from Kentucky and still earlier from Virginia.

“The ceremony was witnessed by a goodly number of the friends and relatives of the families, and took place at half past 6 o’clock in the evening, when after partaking of the wedding feast sumptiously (sic) and elegantly prepared by Mrs. Perrin, the happy couple repaired to the train at Greenfield when they embarked for West Liberty, Iowa, which place they will make their future home.”

Joseph managed the extensive real estate interests left by his father, but on settlement of the latter’s estate he moved to Irving, Kansas. There he opened a lumber yard, furniture store and bank. As an entrepreneur his endeavors also embraced real estate and the raising of thoroughbred stock. His general interests included the Irving Opera House, of which he was half owner, and Freemasonry. On December 25, 1886 he was installed as Worshipful Master of Blue Valley Lodge No. 112 A.F. & A.M. in Irving.

When he became president of the Armstrong Bank in Irving, he realized his greatest ambition. He saw this as an opportunity for substantial financial gain. However, he was later to abandon this ambition for the Cause of Christian Science.

When he opened a new bank building, The Irving Leader of February 2, 1888 commented on it:

“J. Armstrong moved into his new bank building, Wednesday, and the handsome cashier, Jas. Neal, has a smile for everyone. It is the most handsomely finished bank in the county and Irving is to be congratulated on having such enterprising men in her midst.”

Little did anyone dream then that both the owner of the bank and the “handsome cashier” would some day become members of The Christian Science Board of Directors. James Neal came into Christian Science through the healing of Mrs. Armstrong and later had class instruction with Joseph Armstrong.

In 1886 Mary Armstrong received a letter from an aunt telling her of the healing by Christian Science of a daughter who had been an invalid for fifteen years. Since Mary was herself faced with an unyielding physical problem, Joseph urged her to visit her aunt to learn more about Christian Science. While visiting this aunt’s home she was healed after three treatments by a Christian Science practitioner.

After completing the Normal Course the Armstrongs devoted full time to the Cause of Christian Science preaching the truth they had been taught and doing pioneer healing work in the midwest. The Armstrongs practiced in Kansas and Ohio. Mr. and Mrs. Armstrong’s cards appeared in The Christian Science Journal for the first time in 1888.

During this period Joseph was maliciously confined to a smallpox pest house in Salina, Kansas for six weeks. His understanding of Christian Science enabled him not only to provide protection against this disease, but to heal several cases of smallpox while there. He gained his release by evidencing perfect health which several doctors confirmed after rigid examination.

In 1892 Joseph Armstrong came to Boston at Mrs. Eddy’s request as publisher of The Christian Science Journal. Both Mr. and Mrs. Armstrong were accepted as members of The Mother Church on December 31, 1892. Later, on April 16, 1895 they were sent word signed by William B. Johnson that they had been elected “First Members” of The Mother Church. The communication to Mr. Armstrong read as follows:

“By recommendation of our beloved Teacher and Leader ‘Rev. Mary Baker Eddy’, you were elected a ‘First Member’ of ‘The First Church of Christ Scientist’ in Boston, Mass. at the meeting held Jan. 14th 1895.”

Mrs. Armstrong’s note was identical except that the date of election was February 12, 1895.

They first lived in Roslindale, Massachusetts moving from South Fairview Street near the home of Ira and Flavia Knapp into the house owned by Mrs. Eddy at 175 Poplar Street. In August 1898 they bought a house at 99 Falmouth Street, Boston. (No. 95 became the home of The Christian Science Publishing Society early in 1895, No. 97 being acquired about two years later.) They sold their house to The Mother Church to make way for the Extension and paid rent for their final months of occupancy in 1903. In September of that year they moved to 191 Huntington Avenue. Here Mr. Armstrong taught his last class. Still later they rented a house at 387 Commonwealth Avenue owned by Mrs. Eddy.

Mary Armstrong served Mrs. Eddy at Pleasant View for a short time in 1898, and felt she learned a great deal from this experience. In a statement about her instruction in Christian Science, she wrote:

“True to Mrs. Eddy’s prophecy to me Christian Science as she taught it to me and the correct understanding I gained from her instructions, has never been dimmed, rather has it been more illumined as I progress in my riper years and larger lessons. It was my great privilege to be a member of Mrs. Eddy’s household for a time and to serve her in many capacities, to receive her ‘Well done,’ for work accomplished, her daily teaching face to face, and her confirmation that I had a correct understanding of Christian Science.”

Mr. and Mrs. Armstrong’s activities in the Christian Science movement are summarized in their biographies contained in Pioneers in Christian Science, a biographical loose-leaf book of early workers known to Mrs. Eddy, published by Longyear Historical Society.

As a pioneer practitioner and teacher, and Director, Joseph Armstrong was well known, but by his
book The Mother Church he is perhaps best known by us today. The following excerpts from letters to him from early students after publication of his book show their appreciation for the little volume at that time.

On July 1, 1897 Will S. Farlow, C.S.D., brother of Alfred Farlow, first Committee on Publication wrote him:

“We have received and read your new book ‘The Mother Church’. and consider it a most valuable and interesting work, and wish to thank you for bringing it out.”

Mary Brookins, C.S.B., of Minneapolis wrote to him:

“I want to attempt at least to tell you how much good your new book, ‘The Mother Church’. has done me, and to thank you for writing it…. Again and again, in reading of those stern trials of faith and patience and love, and of the unparalleled victories that led up to the final triumphs, these words of Truth were impressed upon me: ‘With God all things are possible.'”

“The ‘The Mother Church’ will forever stand as a monument of Trustworthiness and Obedience. From my heart I thank you for the many wonderful grand lessons contained in every line and on every page of this priceless volum(e) you have correctly named ‘The Mother Church.'”

William P. McKenzie, C.S.B., himself later to become a member of The Christian Science Board of Directors, wrote the following tribute. Excerpts from this letter to Mr. Armstrong dated June 27, 1907 provide a fitting close to this article:

“God is rewarding you for all your labor of love …. All causation, all power represents the expression of God’s love. In that Love you are comforted and strengthened.”

This article was originally published in the Summer 1975 Quarterly News. 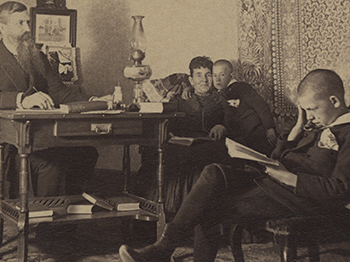 Mary Armstrong: From Kansas to Boston