Mrs. Eddy’s sleigh at the entrance to 400 Beacon Street

No matter the century, when New England is blanketed in snow and Jack Frost is nipping at noses, heading out into the cold can sometimes be daunting. For Mary Baker Eddy, however, swapping out her carriage for a sleigh on her daily drive was a delight. Perhaps this mode of travel harked back to sleighing parties of her youth in New Hampshire,1 or perhaps it kindled fond memories of her first wedding day, when guests arrived by sleigh to celebrate, and her journey to Concord with her new husband, George Washington Glover, that followed.2 Whatever the reason, “she was very fond of sleigh riding,” noted her groundskeeper John Salchow.3 Her daily carriage ride — or sleigh ride, as the case might be — provided time for refreshment and contemplation. “I have uttered some of my best prayers in a carriage,” she told William Rathvon, who worked as one of her secretaries while she lived at 400 Beacon Street in Chestnut Hill, Massachusetts.4 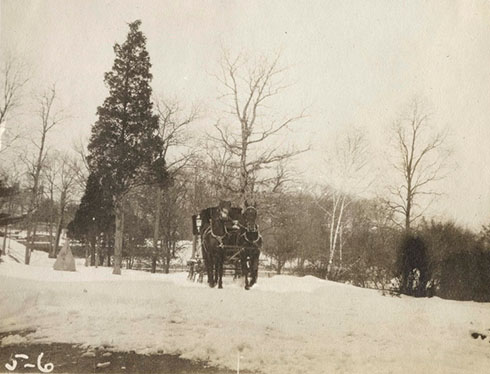 Returning from a sleigh ride near Chestnut Hill

Princess and Major were Mrs. Eddy’s main team of horses while she was living at 400 Beacon Street.5 Whether they were pulling her carriage or her sleigh, the team was preferred over automobiles by Mrs. Eddy, who enjoyed watching the horses.6 And listening to them, too! “We had a couple of strings of silver bells for the horses and on a nice frosty day it made a pretty sight to see the sleigh and hear the jingle of the bells,” recalled Mr. Salchow.7

Dashing through the snow

Mrs. Eddy had multiple scenic routes to choose from in and around Boston for her outings. Her home on Beacon Street was close to both the Brookline and Chestnut Hill Reservoirs, and she would occasionally even venture as far as the Back Bay Fens, from which she could glimpse the dome of The Mother Church extension.8 An amateur photographer in Mrs. Eddy’s household captured this image of her sleigh on a ride near Chestnut Hill.

Typewritten instructions for one specific route from 400 Beacon Street through nearby Newton Centre show Mary Baker Eddy’s handwritten words “in sleigh” added after the heading “Delightful Drive,” indicating this was a favorite winter route.

Lovely weather for a sleigh ride together

Some others of the Chestnut Hill household also enjoyed going for a wintry spin from time to time. This photograph of one such outing shows Adam Dickey, who served as one of Mrs. Eddy’s secretaries, at the reins. His wife Lillian is beside him, and Ella and William Rathvon are in the back seat. Mr. Dickey was accustomed to driving horses, and even stepped in briefly as Mrs. Eddy’s coachman on a sleigh ride once when there was a need. “I assured her that I was quite capable of performing this service for her and would be overjoyed to do it,” he later recalled.9 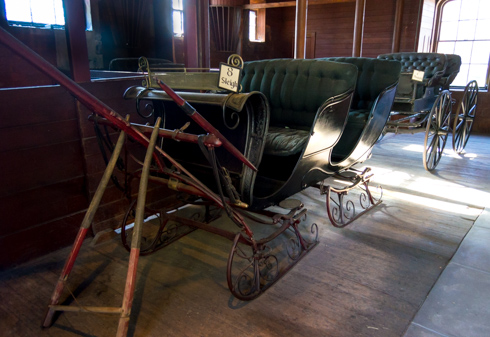 From black and white to color!

Today, the same sleigh that ferried the Dickeys and the Rathvons on their snowy jaunt is on display in the Carriage House at 400 Beacon Street. 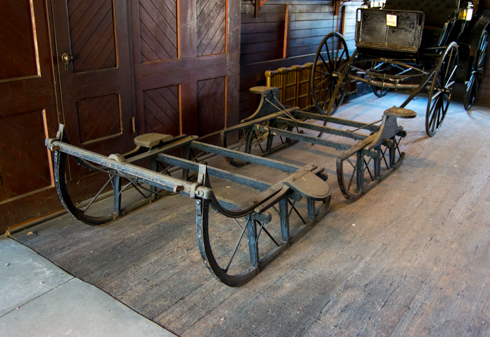 Last year, a pair of sleigh runners were brought down from the hayloft to add to the Carriage House exhibit. The closed carriage that Mary Baker Eddy normally used on her daily drives was designed to be lifted off its wheels and placed on these runners for travel in the snow.