Take a close look at this photograph. Do you see anyone familiar? Looking at the top right corner, you’ll see a man and woman sitting in the front of the train; they are Joseph and Mary Armstrong. The Armstrongs were dedicated early workers in the Christian Science movement who labored in Boston for many years, and Joseph was one of the first members of the Christian Science Board of Directors. Here, you see them on their way up to Mount Washington in the White Mountains for a summer holiday in July 1897. The gentleman standing at the bottom right is Royal D. Rounsevel, also a Christian Scientist and the owner of the White Mountain House, a hotel in Fabyans, New Hampshire. Fabyans, near current-day Bretton Woods, was situated at the base of Mount Washington.

Vacationing in the White Mountains

As early as 1820, tourists from New England began to travel to the White Mountains to take in the area’s rustic grandeur. During Mrs. Eddy’s girlhood, it would have been a rough carriage trip – one that she took as a young woman in the 1840s with her older brother George Sullivan Baker. By the 1850s, railroads greatly eased the journey. In 1869, a cog railway was built that could scale Mount Washington itself, and the area burgeoned with summer sightseers. The White Mountains were a popular destination both for leisure and for the touted health benefits of the mountain environment.

In 1888, Mrs. Eddy stayed at the White Mountain House with her secretary Calvin Frye, her recently adopted son Ebenezer Foster Eddy, and one or two other students. This had been a year full of tension and discord among Mrs. Eddy’s students, and she had also recently been in Chicago in June for a packed National Christian Scientist Association meeting. Seeking a brief period of peace and quiet, she journeyed to the White Mountains, an area she had visited before as a young woman. While there, she gave a talk at another local hotel, the grand Fabyan House, on Sunday, August 19.

Ten years later, a Christian Science church would be built in Fabyans to hold seasonal services for visitors. In writing a dedicatory address to that church, Mrs. Eddy spoke of foretelling the establishment of this church during her 1888 visit:

“In 1888 I visited these mountains, and spoke to an attentive audience collected in the hall at the Fabyan House. Then and there I foresaw this hour, and spoke of the little church to be in your midst, closing my remarks with the words of Hemans:

For the strength of the hills, we bless Thee,
Our God, our father’s God!”1

After Mrs. Eddy’s visit in 1888, numerous other Christian Scientists began visiting New Hampshire and staying at the White Mountain House, including Joseph and Mary Armstrong and their two young boys. Royal Rounsevel and his wife Emile owned and operated the hotel, and many of the guests who passed through were Christian Scientists. The Rounsevels found a way to share Science and Health with Key to the Scriptures with their guests who were not, a fact noted by Emile in The Christian Science Journal published in September 1897:

“About five years ago we placed ‘Science and Health with Key to the Scriptures,’ upon the table in our public parlor. Guests would take it up and look at it, and seeing what it was, would quickly lay it down and slip away as if they had done something of which they were ashamed. To-day Science and Health, with all the books by its author, are upon the table, and it is nothing uncommon to see them all in the hands of our guests.

About three years ago we commenced to hold services in one room in the house, our number being three or four people; the number increased until last season (1896) our audience filled four rooms, which open into each other, one of which was once occupied by our dear Mother. The last three Sundays of the season of 1896, we held service in the parlor by request of our guests. To-day, August 8. 1897, we had an audience of seventy-five people at the service in our public parlor.”2

Both originally from New Hampshire, Royal Dearborn Rounsevel and Emile Gibson were married in 1881, a second marriage for both. Little is known about how the Rounsevels originally found Christian Science, and although neither was a student of Mrs. Eddy’s, they did have a long acquaintance with her and with many early Christian Scientists. Interestingly, Mr. Rounsevel was acquainted with Mrs. Eddy’s second husband, Daniel Patterson. Mrs. Eddy possessed an affidavit made by Rounsevel in 1902, stating that Mr. Patterson had boarded with him in Littleton, New Hampshire, in 1874, long before Rounsevel had ever heard of Mrs. Eddy. The Pattersons were separated at the time, and Daniel Patterson “spoke of her being a pure and Christian woman, the cause of the separation being wholly on his part, that if he had done as he ought he might have had as pleasant and happy home as one could wish for.”3

Another of the key figures in the White Mountain church was Emma Shipman. A young schoolteacher who learned of Christian Science through two of her aunts and numerous healings of family members, Miss Shipman was originally from Lisbon, New Hampshire. After graduating from high school, she attended Boston University and later became a Brookline schoolteacher. Between 1893 and 1898, Emma spent several summer vacations at the White Mountain House.

Emma Shipman’s involvement with Christian Science in the White Mountains increased during these years, and would gain the attention of Mrs. Eddy. Shortly after the dedication of the White Mountain Church, Emma was invited to join Mrs. Eddy’s last class of 1898 in Concord, New Hampshire. Upon greeting her students at the close of the class, Mrs. Eddy said to her, “So this is my little Mountain missionary.”4

Before a church was built, services were being held in the living room of the White Mountain House, the largest space available at that point, but a dedicated spot was desired. Two Christian Scientists suggested that the group build a small church near the hotel for the benefit of summer visitors. The Rounsevels supplied a plot of land just down the road along the banks of the Ammonoosuc River, and a building fund was organized. Emma Shipman, who was just 26 at the time, was elected as secretary and treasurer. She was asked to write to Mrs. Eddy and see if she approved of the proposed project. On June 7, 1898, Mrs. Eddy responded warmly through her secretary, Calvin Frye, and sent a check for $100 for the building fund.

During the summer of 1898, the little church was ready for dedication and Emma, as secretary and treasurer, sent Mrs. Eddy an invitation written on birch bark and tied with sweet grass. Mrs. Eddy’s reply was read by Emma at the service and may be found in The First Church of Christ, Scientist, and Miscellany (184-186). The address included the following words in Mrs. Eddy’s characteristic poetic style:

“The sons and daughters of the Granite State are rich with signs and symbols, sermons in stones, refuge in mountains, and good universal. The rocks, rills, mountains, meadows, fountains, and forests of our native state should be prophetic of the finger Divine that writes in living characters their lessons on our lives. May God’s little ones cluster around this rock-ribbed church, like tender nestlings in the crannies of the rocks, and preen their thoughts for upward flight.”5

The church was the first Christian Science church edifice built in the state of New Hampshire, and had seating capacity of nearly two hundred. There were two services held for the dedication and both services found the chapel completely filled, so much so that an overflow service was held in the dining room of the White Mountain House.

Emma Shipman later wrote a history of the White Mountain church, and in it she recounted a particular building change: “After the church was dedicated . . . Mrs. Eddy looked at a picture of the little church and she exclaimed, ‘They send me their churches with no spires pointing heavenward!’ This remark of Mrs. Eddy’s caused the building committee to have two designs drawn for a tower and spire. They were sent to Mrs. Eddy for her approval and she chose one. This was added to the church as speedily as possible.”6

At the time of the dedication, the First and Second Readers were Emile Rounsevel and Emma Shipman. As Mrs. Rounsevel was thoroughly occupied with hotel management tasks, Emma Shipman prepared the lesson-sermon for that service, titling it, “The House of the Lord – Spiritual Building.” The citations of the sermon were printed in the September 1898 issue of The Christian Science Journal in their entirety.

Both Emile and Emma wrote to the Christian Science periodicals testifying to the outreach of the little church. Several lectures were given here; one by Bliss Knapp in August of 1904 – the first he ever gave – and another in August 1905 by Judge William Ewing, to a standing room only crowd. It was glowingly reviewed by local papers.

Emma Shipman wrote of a clergyman who said of the Christian Scientists at the White Mountain church that he “had never known people who studied their Bibles more.” She continued in the same article, “The church is situated in the heart of the White Mountains within five miles of seven hotels and within walking distance of four.”7 Of the average Sunday attendance in 1902, two-thirds were not Christian Scientists.

“As automobiles came more and more into use, the custom of spending a month or two at a hotel in this mountain region, began to lose its popularity, until finally, in 1910, it seemed as if the little church had fulfilled its mission so far as was possible under existing circumstances. Its audiences had dwindled to an average of less than a dozen. Instead of attending church, nearly everyone in the region went motoring on Sunday, and very few earnest Scientists had the time to take a vacation in the mountains as they did formerly.”8

An advisory board for the church was formed, and services were continued until the summer of 1912, after which it was decided that the church should be demolished and the land returned to Royal Rounsevel. A marker stood on the spot for many years to commemorate the church, and the plaque now resides in Longyear Museum’s collection. 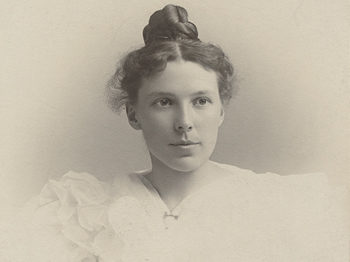 Emma Shipman’s Work for the Cause 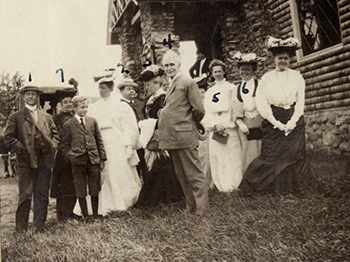