The June 1899 Communion season at The Mother Church was much anticipated. That year, Sunday’s Communion service would be followed two days later by a business meeting—also known as the Annual Meeting.1

“Ten thousand Christian Scientists are in Boston,” the Boston Globe reported, as visitors from across the United States, Canada, and England flocked to the city to attend the first-ever back-to-back events.2

Boston was abuzz with activity in the days leading up to the Sunday Communion service, as the train station awaited the hordes of arrivals and Back Bay hotels prepared for the throngs of out-of-towners. A Boston Globe reporter who visited the Christian Science Publishing Society on Saturday morning found the doorway blocked and the rooms mobbed. Visitors were busy buying books and pamphlets, exploring the offices where the Christian Science periodicals were published, and registering their names and addresses so that other visiting Christian Scientists might be able to locate them over the next few days. 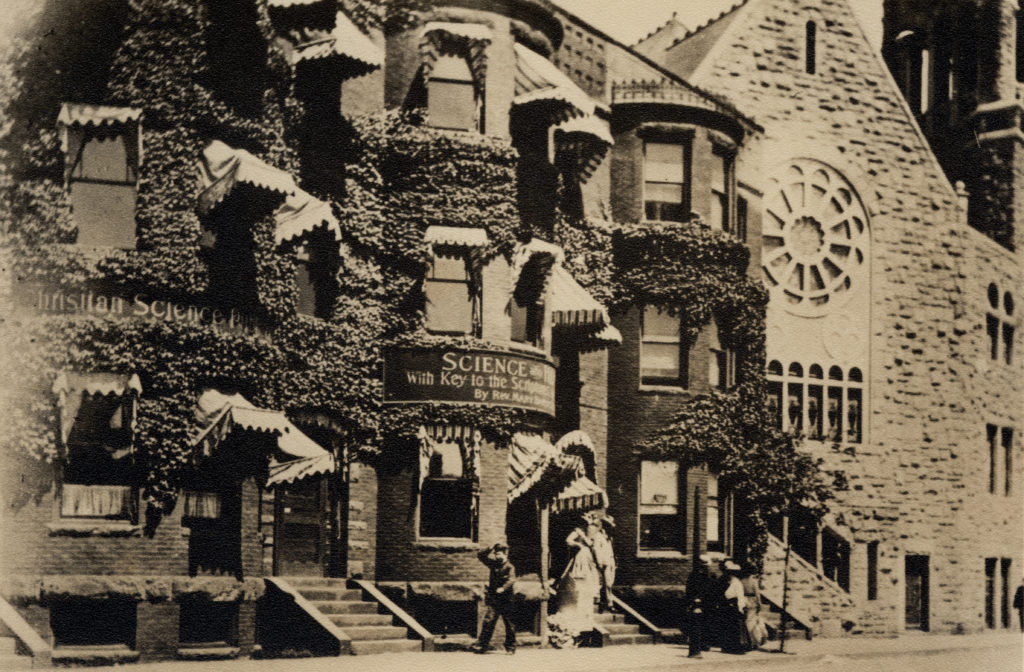 Between the years 1895 and 1903, The Christian Science Publishing Society was located beside the Original Edifice of The Mother Church on Falmouth Street. Photograph, P5007, Longyear Museum collection. 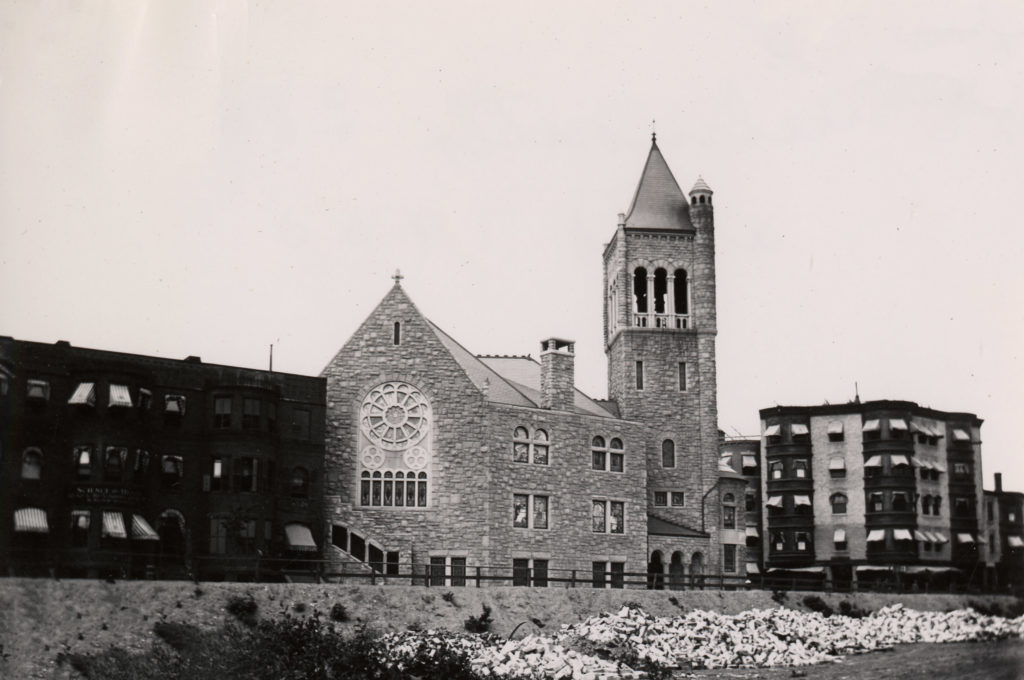 View of The Christian Science Publishing Society to the left of The Mother Church. Photograph, P1784, Longyear Museum collection. 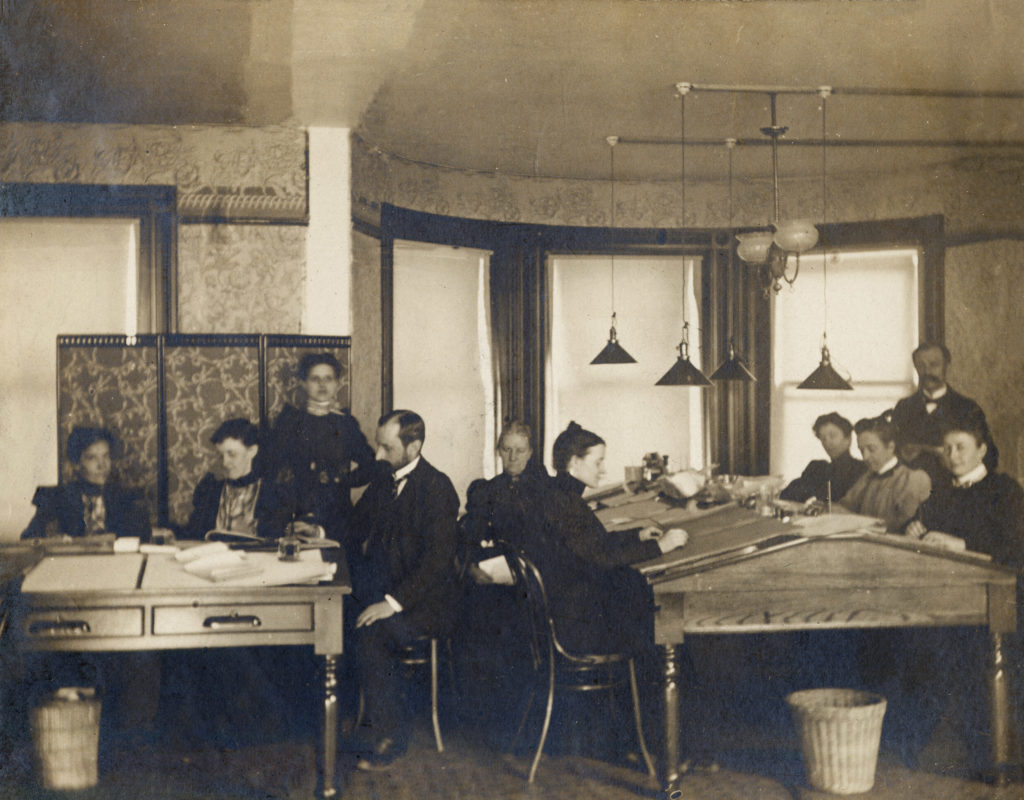 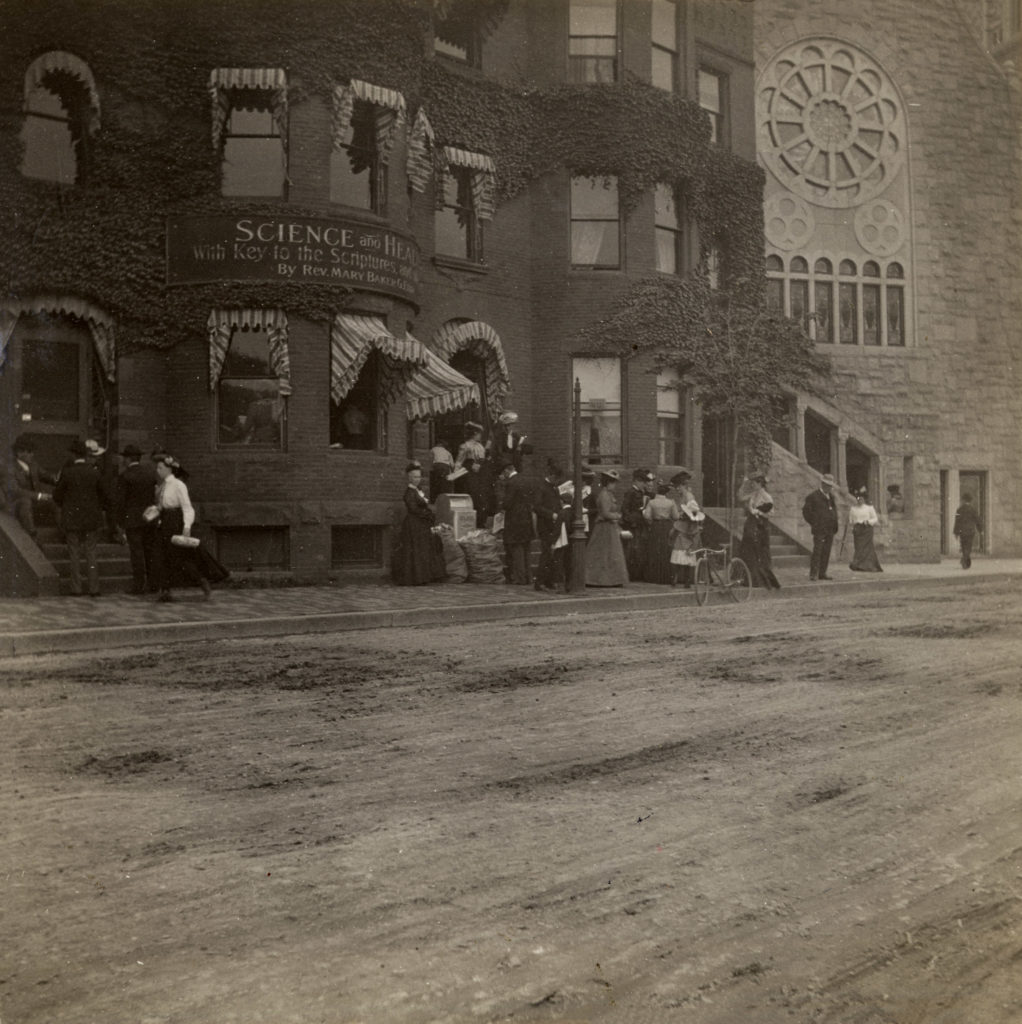 “The overflow spread out upon the sidewalk for some distance up and down the street,” the reporter observed. He overheard a mother, clasping the hand of her son, exclaiming: “Guess we will have to get around to the church by 7 o’clock tomorrow morning in order to get in.”4

On Sunday, June 4, in order to accommodate the overflowing congregation, four Communion services were held in the Original Edifice of The Mother Church,5 whose interior “was prettily decorated for the occasion,” according to the Boston Post. “The reading desks and platform were embowered in a wealth of floral adornment, lilies, hydrangeas, ferns, palms and roses predominated in the details.”6

“The fruition of friendship, the world’s arms outstretched to us, heart meeting heart across continents and oceans, bloodless sieges and tearless triumphs, the ‘well done’ already yours, and the undone waiting only your swift hands, — these are enough to make this hour glad. . . . Brethren, our annual meeting is a grave guardian. It requires you to report progress, to refresh memory, to rejuvenate the branches and to vivify the buds, to bend upward the tendrils and to incline the vine towards the parent trunk. You come from feeding your flocks, big with promise; and you come with the sling of Israel’s chosen one to meet the Goliaths.” 7

Joseph Eastaman, a Christian Science practitioner and teacher from Somerville, Massachusetts, and one of Mrs. Eddy’s faithful students, was in the congregation that day. He found Mrs. Eddy’s message helpful, instructive, encouraging, and deeply moving.

“Will you please accept my thanks for having written that letter to The Mother Church which has done me oh, so much Good,” he wrote to her the next day. “Listening to the reading of it, I again rededicated myself to God and to the work of C[hristian] S[cience] and with big tears of love and gratitude rolling down my cheeks, I thanked God again and again for giving the world such a Leader as you are. . . . There too I prayed to God for grace and wisdom each day to know and do that which will make me worthy to be recognized as one of Mrs. Eddy’s followers.”8

Mary Brookins, who had traveled to Boston from her home in Minneapolis, Minnesota, also wrote her teacher about the Communion message:

“It seems to me that outside of our precious textbook this is the strongest and most beautiful of all your messages of love to your children,” she told Mrs. Eddy. “In it is embodied the wisdom of the teacher, the courage and power of the great commander, the clear, far-seeing vision of the prophet, and the tenderness and loving solicitude of the Mother, all combined in such a marvelous way, that I only long for leisure and experience to have it unfolded to me in all its fullness of Love and power.”9

After Mrs. Eddy’s message to the congregation was read aloud, something unexpected occurred. Judge Hanna announced that those wishing to visit Pleasant View, Mrs. Eddy’s home in Concord, New Hampshire, should defer their plans until after Wednesday.10 Was this a hint, perhaps, that Mrs. Eddy might visit Boston for the Annual Meeting on Tuesday?

It was indeed. The following day, Monday, June 5, accompanied by several members of her household, Mrs. Eddy boarded a private car on the 2:20 p.m. train to Boston from Concord.11 When she arrived at the depot, a carriage was awaiting to whisk her and her traveling companions to her townhouse at 385 Commonwealth Avenue, where Judge Hanna and his wife, Camilla, lived.12

Tuesday found scores of Christian Scientists, journalists, and others headed to Boston’s Tremont Temple, as the Original Edifice of The Mother Church wasn’t large enough to accommodate the crowd for the business meeting, which turned out to be the largest meeting in the history of the First Church of Christ, Scientist, to that date.13

Tremont Temple was familiar to Christian Scientists, as well as to Boston’s forward-thinking religious leaders of the day. It was organized in 1839 by Timothy Gilbert, who left the Second Baptist Church of Boston after being criticized for sharing his pew with his African-American servants. With Reverend Nathan Colver serving as pastor and 82 members, Mr. Gilbert organized a Baptist Church where all races, colors, and creeds were welcome. Over the years, Tremont Temple gained in numbers and recognition, moving locations several times.14

Some Christian Scientists would recall meeting in Tremont Temple a decade earlier for the 1887 annual meeting of the National Christian Science Association.15 Some would recall that it was at Tremont Temple in 1885 where Mary Baker Eddy was given just ten minutes to rebut Reverend Joseph Cook’s infamous attack against Christian Science.16 At that gathering, Mrs. Eddy addressed a crowd of more than 2,000, whose thoughts, wrote one biographer, “ranged from benignly curious to highly skeptical to openly hostile.”17 Irving Tomlinson recalled Mrs. Eddy turning to Rev. Cook and asking, “’I can hardly explain Christian Science in ten minutes. May I have a few moments more?” to which the Reverend replied, “No, Madame, and if you take one moment longer you will be forcibly stopped.”18

But that edifice was no longer standing. It had been destroyed by a fire in 1893. By the time the 1899 Annual Meeting of The Mother Church took place, the latest iteration of Tremont Temple, which was completed in 1896, was just three years old.

By 10:00 on Tuesday morning, June 6, the vestibule was already crammed with those awaiting the 2 p.m. meeting. The doors weren’t scheduled to open until 1 p.m.

“Many came with their lunches and took up stations ready to get in as soon as the doors were swung back,” reported the Boston Journal. “The throng became so great that it was absolutely necessary to throw back the doors before the time set, and almost as quick as a flash the great audience room, the floor of the hall, was filled.”19

As they took their seats, visitors observed that the church had been tastefully adorned for the occasion.

“The decorations were beautiful in the extreme,” the Boston Globe reported. “Fresh bunting festooned the sides of the galleries and long streamers were attached to the great chandelier and fastened on either side. The platform was a bank of ferns, palms and potted plants, and around the circular front was arranged a decoration of pinks and the green fronds of tiny ferns.”20

The meeting began promptly at 2 p.m. as planned. The congregation sang hymns, the treasurer of the Church gave his report, and selections from the Bible and Science and Health with Key to the Scriptures by Mary Baker Eddy were read aloud, followed by silent prayer. Then, as William McKenzie, the newly elected President, was giving his address, there was a ripple of movement in the audience.21

“There was the sound of hundreds of people turning in their seats and watching eagerly for the coming of Mrs. Eddy,” reported a journalist who was in the crowd.23 Escorted by Judge Hanna, Mrs. Eddy made her way up the platform steps. She wore a becoming gray hat, an elegant gown of gray satin covered with black lace, and a black veil. The audience stood in respectful silence until Mrs. Eddy was seated, then began to applaud “with something deeper than noisy enthusiasm,” as one journalist noted. “Mrs. Eddy allowed the hand-clapping to echo for the briefest space and then with a faint smile on her face arose and bowed.”24

Judge Hanna told the gathered crowd, “Whatever the disappointment we may have felt because of the absence of our Leader and Mother from our Communion service is more than compensated for by the fact that she is now here. You all know her and you all love her. She knows you all and loves you all. . . .”25

After his introduction, Mrs. Eddy again rose to her feet. Her remarks were brief but memorable. Her message began:

“My Beloved Brethren: — I hope I shall not be found disorderly, but I wish to say briefly that this meeting is very joyous to me. Where God is we can meet, and where God is we can never part. There is something suggestive to me in this hour of the latter days of the nineteenth century, fulfilling much of the divine law and the gospel. . . . There is with us at this hour this great, great blessing; and may I say with the consciousness of Mind that the fulfilment of divine Love in our lives is the demand of this hour — the special demand.”26

“Beautiful! Beautiful!” exclaimed a woman under her breath as Mrs. Eddy’s finished speaking, though loud enough for a nearby reporter to catch her words.27 Irving Tomlinson noted, “There were tears of joy in many eyes as she concluded with the words: ‘So shall all earth’s children at last come to acknowledge God, and be one; inhabit His holy hill, the God-crowned summit of divine Science; the church militant rise to the church triumphant, and Zion be glorified.’”28

At the conclusion of Mrs. Eddy’s remarks, the congregation sang the Doxology—the first hymn in the Christian Science Hymnal. Mrs. Eddy left the auditorium, heading next door to Boston’s famous Parker House hotel, where she took a suite and met with the Christian Science Board of Directors, as well as a few friends, before returning to Pleasant View on the 5:00 p.m. train.29

Rev. Tomlinson, who accompanied Mrs. Eddy throughout the entire trip, couldn’t help but be struck by the vast difference between this visit to Tremont Temple and the one in 1885, when Mrs. Eddy had delivered her rebuttal.

“Those of her students who remembered those cruel days could not but note the contrast,” he would write. “Mrs. Eddy’s name was now known and honored throughout the world; her churches engirdled the earth. Formerly a hostile audience, now every seat was occupied by devoted followers; then division and contumely, but now honor and reverence. As Mrs. Eddy looked out upon the vast sea of faces, each of whom had been blessed by her message; as she saw and felt the love which welled up from each heart, what wonder that tears of joy dimmed her eyes.”30