Christmas Day, 1909: In the second floor study of 400 Beacon Street, a group of household workers assembled before Mary Baker Eddy. It was a Saturday, just before noon, and a turkey dinner was roasting in the oven downstairs. On the desk at her left side, there was a freshly penned note. Answering Mrs. Eddy’s request, Laura Sargent stepped forward and read the message to the group:1

MY HOUSEHOLD
Beloved: — A word to the wise is sufficient. Mother wishes you all a happy Christmas, a feast of Soul, and a famine of sense.
Lovingly thine,
MARY BAKER EDDY2

The moment must have been sweet, and the message cherished. More than a mere seasonal gesture, her words, though few, belied a characteristic depth. Christmas had long been to Mrs. Eddy a predominantly spiritual celebration. In various publications over the years, her observations about Christmas looked beyond the “shadow of frivolity” toward “the real, the absolute and eternal.”3

On that Christmas morning, Mrs. Eddy was particularly cheerful. She had started her day earlier than usual, and around mid-morning she met with her metaphysical workers. “A cheery, holy Christ mass to you all!” she said with a smile as they entered her study.4 Her secretary William Rathvon remembered her reminder to them of the day’s spiritual significance: “A holy uplifting sense of Life, Truth, and Love is the true Christmas.”5

After her initial meeting, Mrs. Eddy no doubt continued working at her desk. She must have been pleased with a simple letter she received signed by the household; they wished her a happy Christmas. For a number of years, receiving gifts had become increasingly objectionable to her. Too often it seemed people were prone to send her lavish presents. A decade earlier, she had asked publicly for an exemption from all Christmas gifts.6 She stated in 1902 that she preferred seasonal telegrams because they required less attention, and gave her “more time to think and work for others.”7 By the end of 1905, however, she felt even telegrams were too time-consuming. A new bylaw printed before Christmas that same year prohibited all seasonal gifts and greetings from church members to her.8

Despite this rule, Mrs. Eddy apparently appreciated the kind Christmas note from her household, and its loving reply was due. This was perhaps becoming a Chestnut Hill tradition, because a similar exchange of gratitude had occurred the previous Easter. On that occasion, her typed response thanked her workers for their letter and service, additionally wishing: “May this glad Easter morn find you all happy and blest in the understanding of Christian Science.”9

Minnie Scott, a household cook, was actually the initiator on both occasions. It had been her idea to send both the Easter and Christmas notes to Mrs. Eddy, which Mrs. Scott wrote and then had the other workers sign.10 All in the house no doubt appreciated what they received in return — for both the Easter and Christmas messages, facsimiles were made and distributed to all the workers at 400 Beacon Street.11

Although the Easter message was never published, the Christmas message was; her handwritten note was quickly forwarded to The Christian Science Publishing Society, and the facsimile was printed in the Christian Science Sentinel a week later.12 Some, like Julia Bartlett, cut out the note from the pages of the Sentinel for safekeeping.13 Irving Tomlinson framed his facsimile and hung it from a wall in his study; to him it was Mrs. Eddy’s “Christmas gift to the whole world.”14 William Rathvon considered it “a loving greeting to those who were endeavoring to uphold her hands on the mountain top of righteous endeavor.”15

It was a memorable gift on a Christmas day that otherwise passed quietly at 400 Beacon Street. The staff enjoyed a traditional turkey dinner, and Mrs. Eddy spent the afternoon working through her mail with a secretary.16 After the sun had set, snow began to fall softly. That night several inches would fall and blanket the grounds and the trees.17

The next morning, with snow still falling, a brilliantly white landscape awaited Mary Baker Eddy and her household. Although Christmas had come and gone, the spiritual celebration continued. To Mrs. Eddy, every day was a Christmas.18 Her timely message, a reminder to her household, remains a timeless gift to the world. 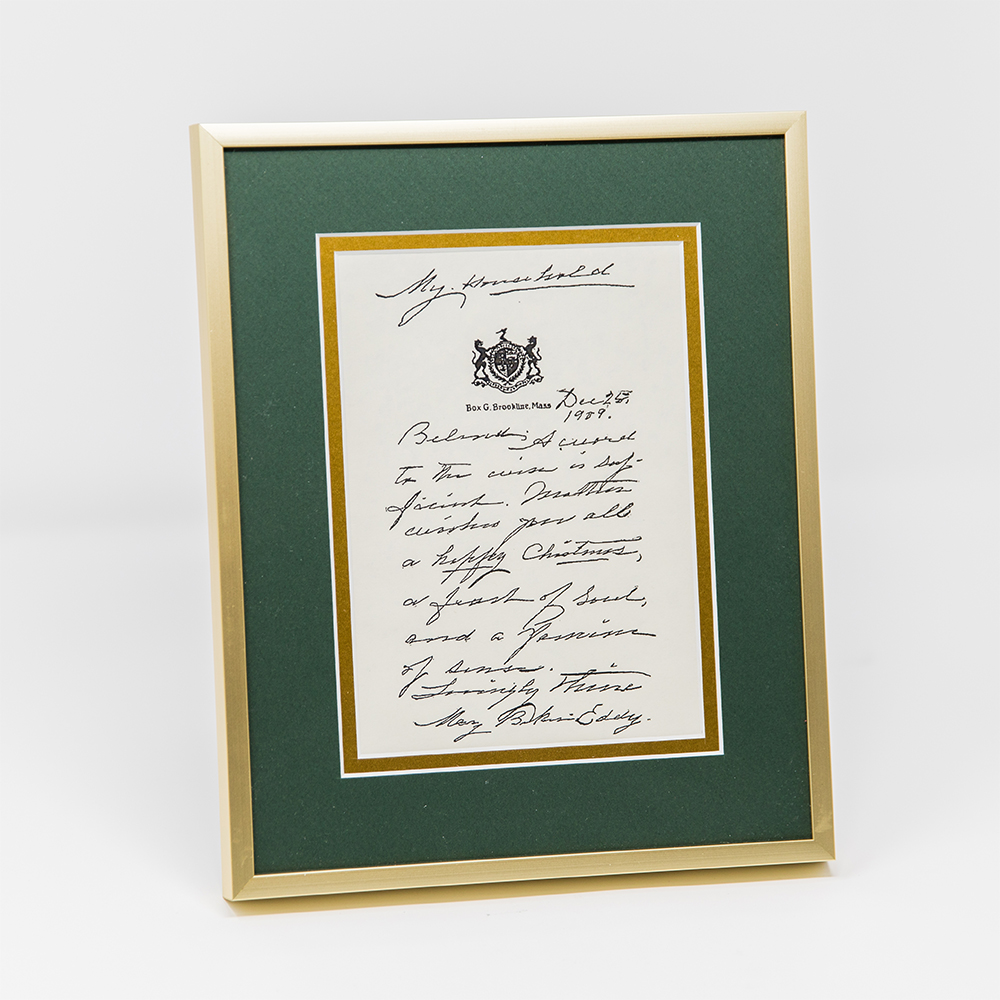 A framed facsimile of Mrs. Eddy’s Christmas message is available for purchase in the Longyear store. 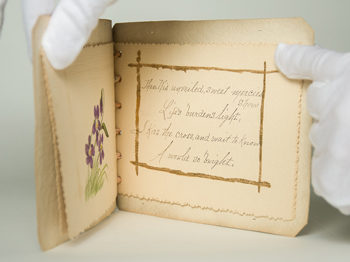 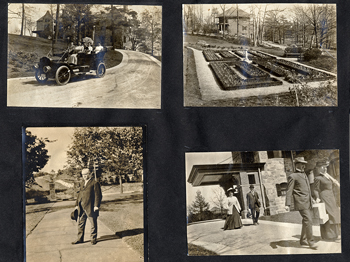