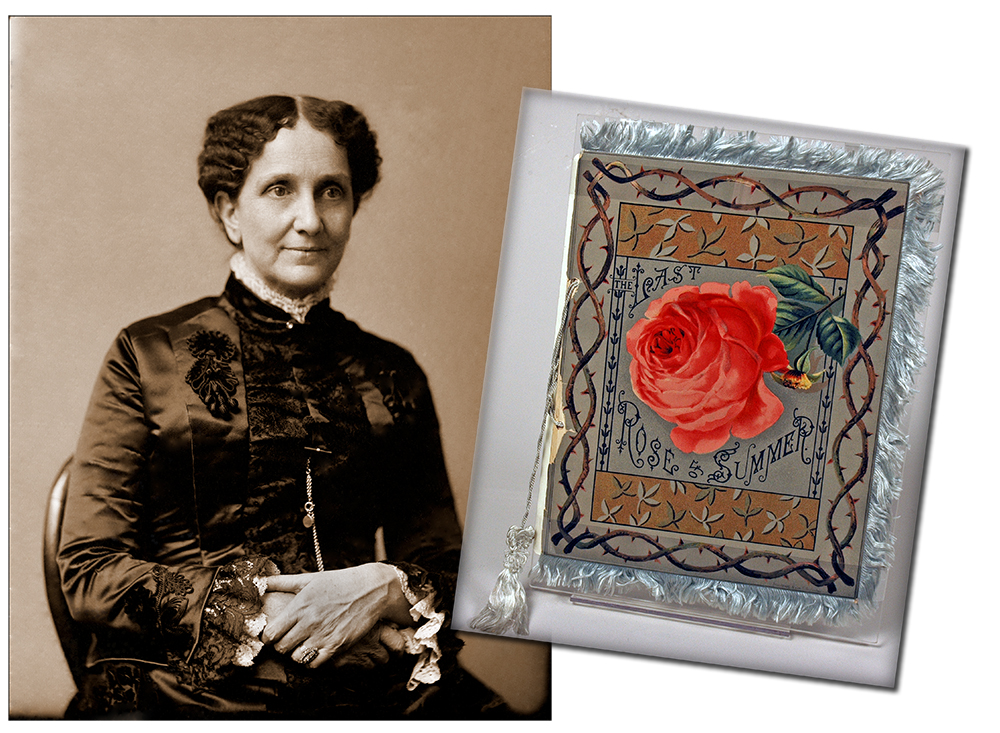 Question: Did the Leader of Christian Science give Christmas presents? Answer: Indeed she did! And she gave gifts on special occasions, along with remembrances to thank or encourage people. In December 1884, Mrs. Eddy sent a number of cards like the one shown above as Christmas greetings to friends and students. Her Christmas card contained the poem “The Last Rose of Summer,” by Thomas Moore. It brings to mind her love of flowers and of the color, soft rose. This card is signed, “Your loving Teacher, Mary B G Eddy.” Mrs. Eddy liked to give people books — works of her own as well as those by other authors. She also gave gold jewelry, framed photographs, clocks and watches, and a variety of useful and enjoyable things. The following is a selection from Longyear’s collection of gifts and greetings from Mrs. Eddy. 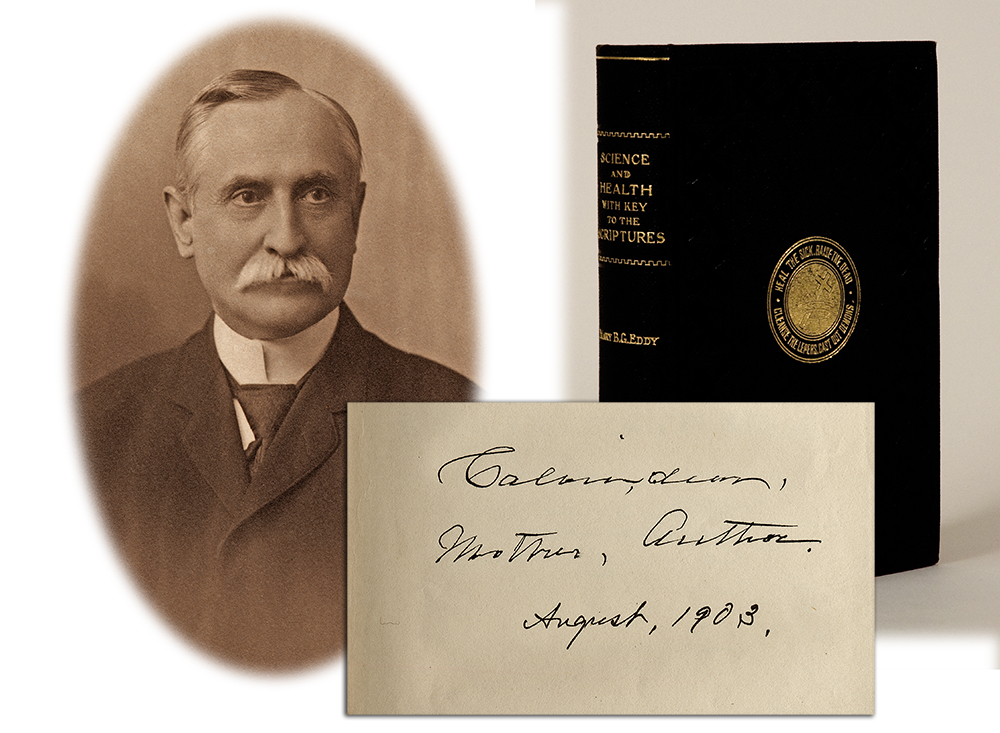 A gift with a special meaning for a very special worker

At Pleasant View in Concord, New Hampshire, during the years 1902 and 1903, Mary Baker Eddy was immersed in major revisions of both Science and Health and the Manual of the Mother Church. It was a trying period for her and for her loyal lieutenant, Calvin Frye, who had not left her side since the day he answered her call for help twenty years earlier. Mrs. Eddy was sometimes exasperated by Calvin’s ways, but always grateful for his faithfulness. Referring to his steady help in preparing the revised edition, she burst out one day, “Oh, Calvin, what a work you are doing for the world!” A few weeks later she reiterated that sentiment, telling him that he had done more for Christian Science than any other person on earth except herself. This copy of the revised Science and Health, a gift to him in August 1903, is inscribed simply: “Calvin, dear, Mother, Author.” 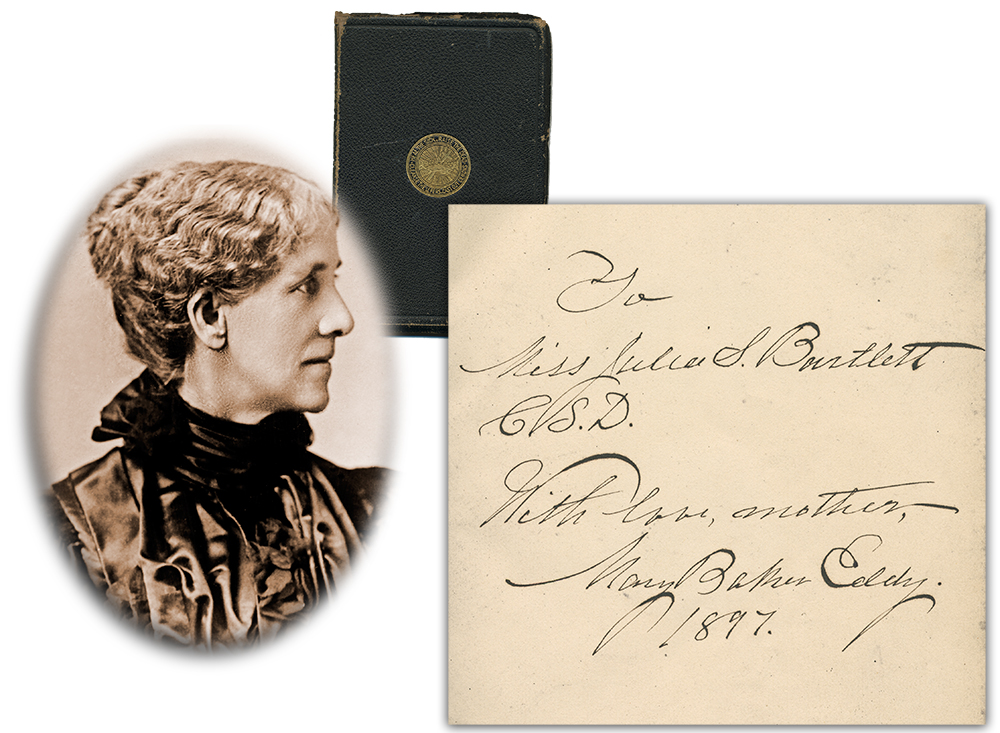 To a friend in need

This copy of Mary Baker Eddy’s then newly-published Miscellaneous Writings 1883-1896 was a gift to her student Julia Bartlett in 1897. When Julia was appointed one of the twelve “First Members” of the reorganized First Church of Christ, Scientist, she was “the earliest of Mrs. Eddy’s students still to be active, loyal, and prominent in the movement,” according to biographer Robert Peel. Upon learning that Julia’s beloved brother had passed on, Mrs. Eddy sent this volume to Julia by express. It’s inscribed, “To Miss Julia S. Bartlett, C. S. D. With love mother, Mary Baker Eddy, 1897.” Mrs. Eddy placed the book’s ribbon marker at her poem “Come Thou” and marked a verse for Julia’s comfort: Be patient, waiting heart: Light, Love divine Is here, and thine; You therefore cannot part. In a note Julia said: “I opened it at once where the marker was placed and saw the verse she meant me to see. The book was never used by anyone but myself — and the marker never removed since she placed it there.” Julia’s family, too, never disturbed the marker. Today, the marker still remains on the page where Mrs. Eddy placed it. 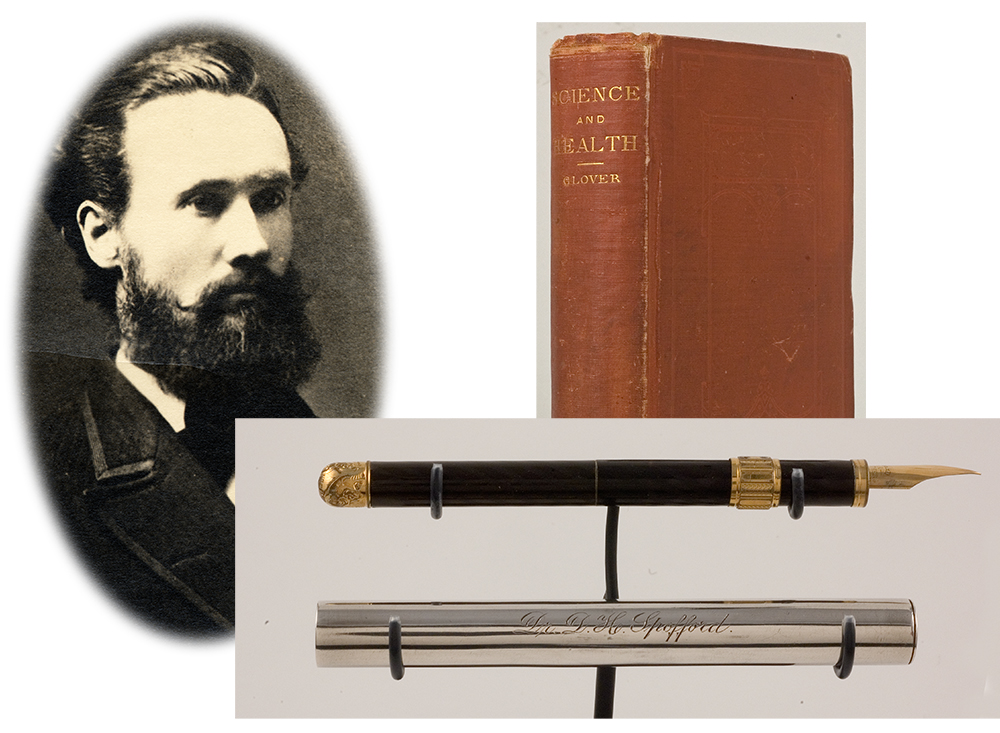 A piece of history given to one who betrayed her hopes

In June 1876, Mrs. Eddy presented this combination pen and pencil to a promising young student who was assisting with publication and distribution of the first edition of Science and Health. In the accompanying note she wrote: “To my student, Daniel H. Spofford, I bequeath the pen with which ‘Science and Health’ was written by me in 1874 – for his untiring zeal in the cause of humanity, his fidelity to Truth and efforts in behalf of Metaphysical Science. June 4th 1876.” One month later, in Lynn, Spofford was one of the founding members of the Christian Scientist Association. Regrettably, Spofford became disgruntled and disruptive shortly thereafter. A year later he was ejected from the association he had helped found. 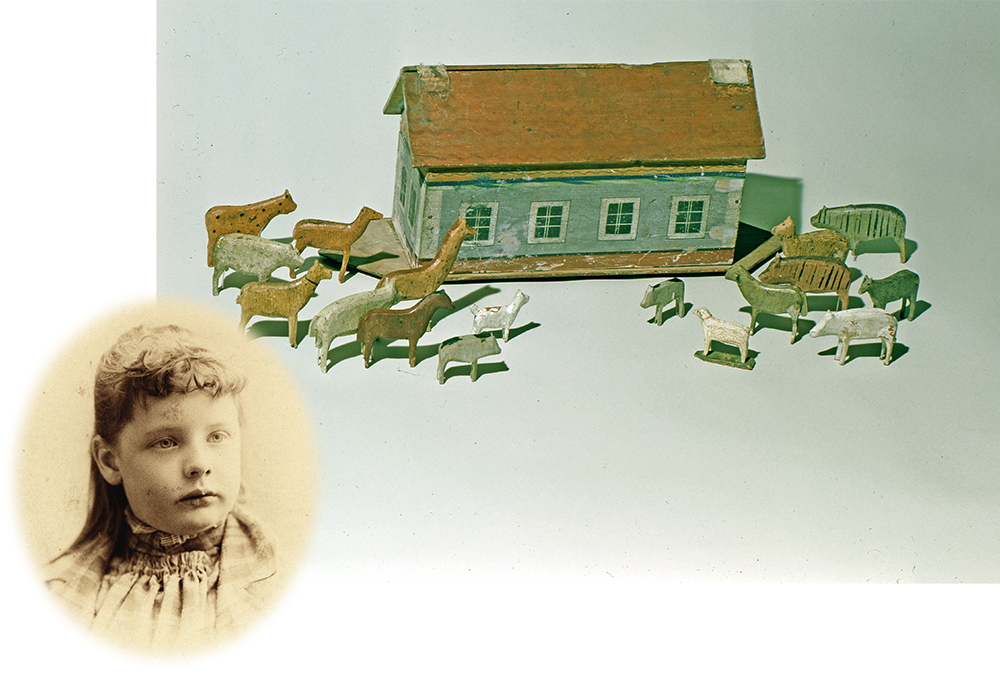 Noah’s ark for a young friend

In mid-1889, Mrs. Eddy left Massachusetts, moving eventually to Concord, New Hampshire. In the house she rented at 62 North State Street, she wrestled for two years with the reorganization of her church, and with making major revisions to Science and Health. As this work concluded, occasional moments of leisure allowed her to befriend young Helen Dadmun, her neighbor across the street. Sometimes she invited Helen to ride with her in her carriage. One festive day, she and Helen stood on the balcony overlooking the street, cheering a passing circus parade. Mrs. Eddy also took pleasure in giving little gifts to Helen, including books and toys, such as a set of paper dolls and the painted-wood Noah’s Ark with animals, shown above. 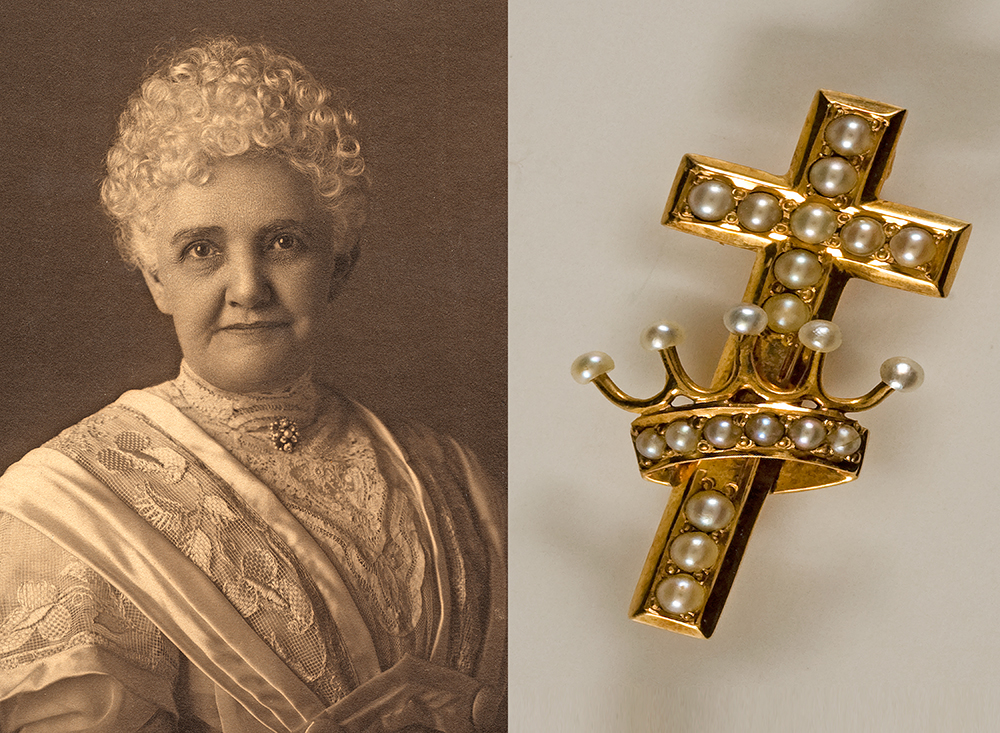 A cross and crown for Laura

This gift of a 14-karat gold cross-and-crown pin with pearl inlay showed Mary Baker Eddy’s appreciation for the student she had sent to New York in the mid-1880s to establish Christian Science there. In 1884, Laura Lathrop had been a physically helpless invalid, living in the American Midwest. Her husband’s passing had left her nearly penniless and in despair. In January 1885, she agreed, reluctantly, to try Christian Science, and set out for Chicago, where she would visit a practitioner named Caroline Noyes. She had to be carried in a chair onto the train for the 125-mile trip and, once in Chicago, lifted into a carriage. In the following weeks, Laura received Christian Science treatment from Mrs. Noyes and was healed. In April, she attended a class taught by the Chicago practitioner, and by summer she was in Boston, studying with Mrs. Eddy. Afterwards, Mrs. Eddy asked Laura to help bring Christian Science to New York City. Laura accepted, and through many years of healing and teaching, the one-time helpless invalid worked tirelessly to advance the Cause of Christian Science in New York City. Often facing opposition and difficulty, as well as great success, Laura could well appreciate the significance of the cross and crown.

These were Mrs. Eddy’s words regarding the role of her student Thomas Hatten in helping to establish the Sunday School of The Mother Church in Boston. Her gift to him of the 14-karat gold pocket knife, above, was engraved with a facsimile of her own signature, indicating the care she took to make this gift special. This type of small knife was originally used to trim the points of quill pens and is often called a “pen knife.” Thomas Hatten was a friend of James Neal in Irving, Kansas, where both young men learned of Christian Science. When Hatten’s mother was healed of an illness through Christian Science treatment, he studied Science and Health and then traveled 400 miles to St. Louis for a class in Christian Science with Janet Colman. In 1889, Thomas, his friend James Neal, and nearly seventy others were students in a Primary class with Mrs. Eddy in Boston. After the class, Hatten became an active Christian Science practitioner, first in Kansas and later in Boston. In 1898, he was appointed a trustee of the newly-formed Christian Science Publishing Society. In 1901, he was called to Pleasant View to serve as a secretary during the challenging months when Mrs. Eddy was completing her revisions of the 226th edition of Science and Health. 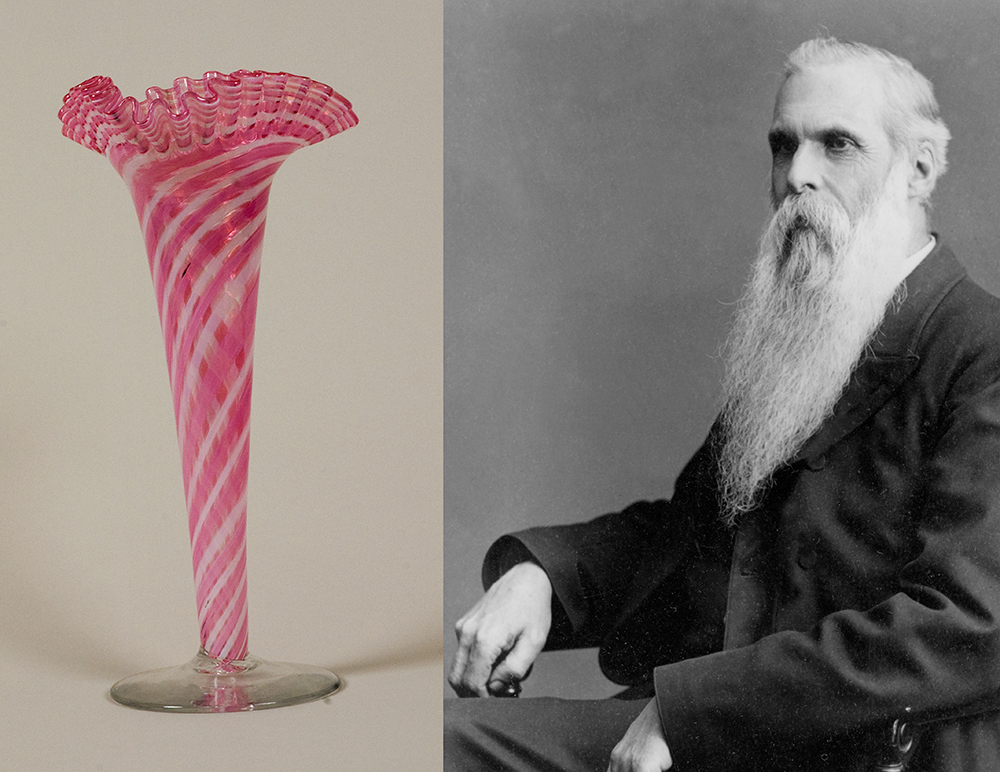 A birthday present for Ira Knapp

For about two months in the summer of 1891, after completing revisions for the landmark 50th edition of her major work, Science and Health, Mrs. Eddy moved back to Boston from Concord, New Hampshire. In Roslindale, a Boston suburb, she purchased a home across the street from the Knapp family. Ira Knapp and his wife, Flavia, were rock-solid students and friends. Mrs. Eddy would appoint Ira as one of the first directors of The Mother Church. During her brief stay in Roslindale, Mrs. Eddy became aware that her neighbor had developed what his son Bliss Knapp described as “an abnormal sense about celebrating birthdays.” He refused to celebrate them. Mrs. Eddy felt this posture was excessive and needed correction, so, on Ira’s birthday, June 7, she gave him a birthday present! The vase shown above, filled with flowers, was sent across the street to the Knapp home, accompanied by a photograph of the sender in a hand-painted frame. June 7 also happened to be Bliss’s birthday, so she sent him a present, too — her favorite canary in a fine brass cage.

For a loyal friend: a book illustrating the Christmas spirit

In July 1910 Mrs. Eddy sent her illustrated poem Christ and Christmas to her friend Mary Beecher Longyear, whose mansion was near Mrs. Eddy’s home in Chestnut Hill, Massachusetts. The gift was inscribed, “To Mrs. Mary Beecher Longyear With Love, Mary Baker Eddy.” Mrs. Eddy appreciated Mrs. Longyear’s generosity to the Cause of Christian Science. And although Mrs. Longyear had not been in any of her classes, Mrs. Eddy addressed her as “student” in a note she sent her a couple of months later, making a pun on Mary Longyear’s name: “Beloved Student, Allow me to wish you long years, life perfect and immortal. May God crown your years with blessings. Lovingly yours, Mary Baker Eddy.”